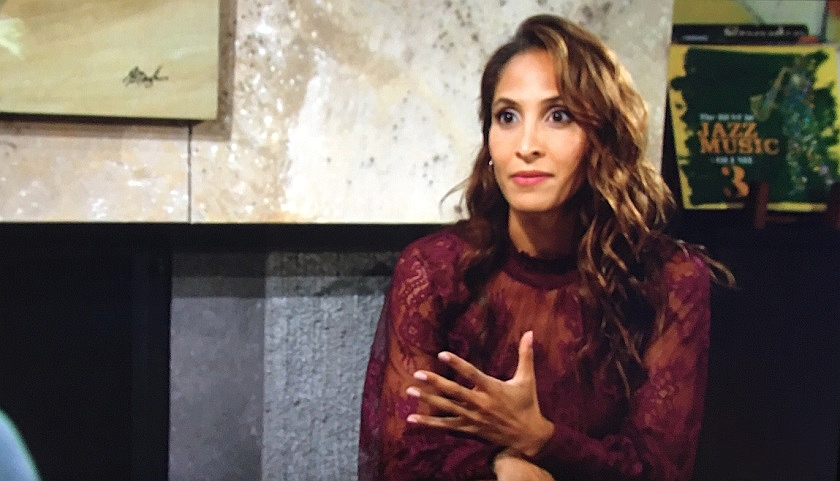 The Young And The Restless (Y&R) scoop for Tuesday, October 6 suggests Lily Winters (Christel Khalil) will confront her brother.

Phyllis will meet with Victoria at her office and pitch her the idea of having Newman clients stay exclusively at The Grand Phoenix. “All of Newman’s guests, clients, associates, what have you – in rooms at a discounted rate.”  Needless to say, Victoria will shoot her down.

At Society, Jack will ask Lauren if she’s seen Dina Mergeron’s (Marla Adams) emerald necklace. He’ll tell her the trail led to her father Neil Fenmore. Lauren will say it may have been put into storage. “Although if I find it I’m gonna be very upset with myself,” Lauren will tell Jack. “That I could overlook such an exquisite piece.”

Meanwhile, Kyle Abbott (Michael Mealor) and Summer will relax in their hotel room. They’ll talk about how their families think they’re away on business. But viewers know they’re planning to elope. However, Summer will have second thoughts. “It’s such a big moment in our lives,” she’ll say. When he leaves the room for a moment, Summer will look at his phone and see text messages between Kyle and Lola Rosales (Sasha Calle).

Other spoilers tease a judge will dismiss Adam Newman’s (Mark Grossman) lawsuit against Chancellor Communications. Chelsea Newman (Melissa Claire Egan) will tell him the whole article wasn’t just bad for him however, it was also bad for her. She worked hard on the launch of her new company. Now it’s become collateral damage. Adam will once again vow revenge on Billy Abbott (Jason Thompson).

Finally, Lily will ask Devon Hamilton (Bryton James) why she had to find out about Hilary’s twin sister from Billy. Considering she was responsible for Hilary’s death it was upsetting to Lily “to find out that I’m working with her twin sister in such a jarring way.”

She’ll also say she’s worried it could send him on another spiral of grief. Devon will tell her not to worry. He will also apologize to Lily and tell her he was caught up in his own feelings and his shock. He had meant to tell her about Amanda Sinclair (Mishael Morgan) himself. “I didn’t mean to hurt you,” he’ll say. But will she forgive him?