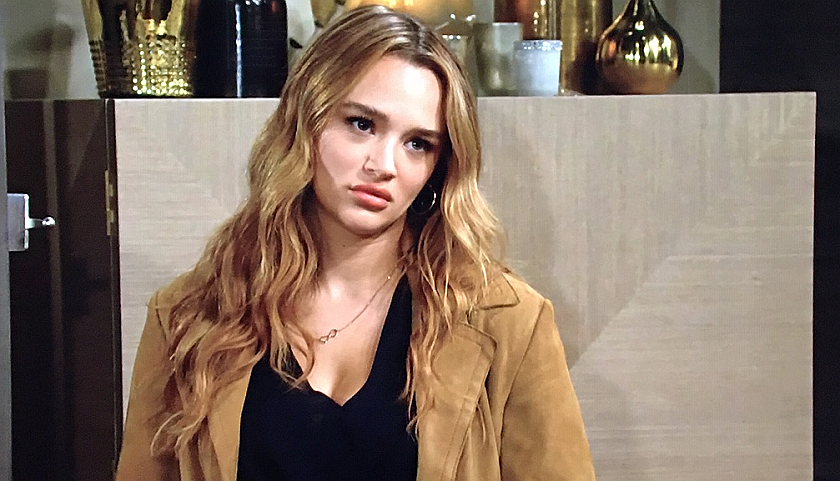 The Young And The Restless (Y&R) scoop for Tuesday, October 27 reveals Summer Newman (Hunter King) will make a tough decision.

Now that Elena’s moved in with Lola Rosales (Sasha Calle), the chef will try to convince her a girls night out is what she needs. “We have to do something big,” Lola will say. “If it flops, then we can look at each other and say that we’re never leaving this apartment again.”

Spoilers tease Nick will tell Phyllis he wants to buy out his sister’s shares of The Grand Phoenix. Phyllis will say she can’t let him do that. But when she sees Billy Abbott (Jason Thompson) at the bar, she’ll have an idea.

She’ll spot their daughter Summer trying to head up to a room before they see her. “We have been worried sick,” Nick will say. He’ll also ask her what happened with Kyle Abbott (Michael Mealor). However, he’ll say if “it hurts too much” to discuss it, they can do it some other time.

Then Phyllis will approach Billy and say she’s having problems with Victoria Newman (Amelia Heinle). He’ll ask if Phyllis wants him to intercede for her. “Would you do that?” Phyllis will ask. “I mean, she’s sort of an immovable object.” She’ll hint that her daughter has trust issues with men and will imply that Billy caused them. Billy will tell her he’s not going to spy on the mother of his children for her.

At Crimson Lights, Nick will try to give his youngest daughter some fatherly advice. He’ll tell Faith Newman (Alyvia Alyn Lind) that every time she thinks about breaking the rules, she should just imagine him saying the word “don’t.” Faith will introduce Nick and Sharon Newman (Sharon Case) to her new friend Jordan (Madison Thompson). Then Nick will grill Jordan, asking if she was the friend Faith was out with the other night.

Finally, when Summer opens the door to her hotel room, she’ll find Kyle inside. She’ll ask him what he’s doing in there. He’ll say he promised he’d prove that she can trust him. Then he’ll notice she’s still wearing her engagement ring. “It must mean something to you.” He’ll then try to convince her to reunite. But when he mentions Lola’s name, Summer will get angry and take off her ring. Is Skyle over?