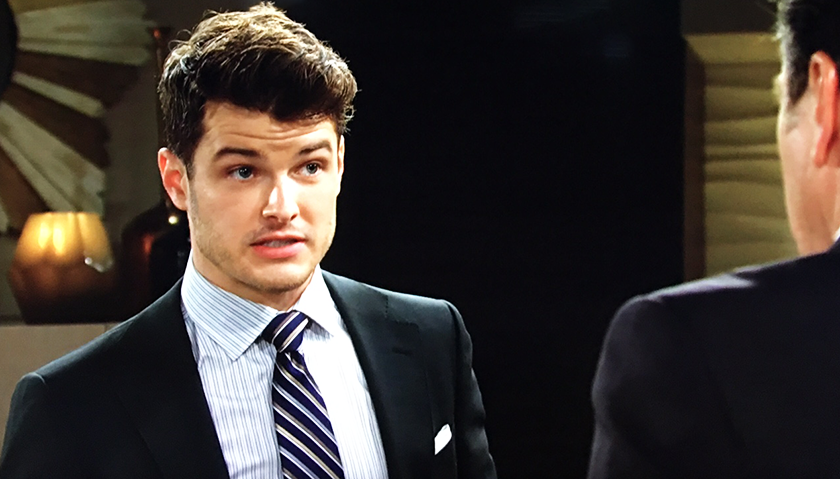 The Young And The Restless (Y&R) scoop for Tuesday, March 30 suggests Kyle Abbott (Michael Mealor) will finally fill his father in.

Also coming up, Sharon Rosales (Sharon Case) and Nick Newman (Joshua Morrow) will find out a mystery man saved their daughter’s life. Plus, Chelsea Newman (Melissa Claire Egan) is sure of herself and Billy Abbott (Jason Thompson) refuses to give up on Cyaxares Media.

Spoilers tease Chelsea will be surprised there are no news stories online about Adam Newman (Mark Grossman). Then she’ll describe to Chloe Mitchell (Elizabeth Hendrickson) how she pulled off her scheme. Chloe will ask her how this is going to effect Connor. “He will learn the cold hard truth about his father and he’ll understand,” Chelsea will say.

Meanwhile, Sharon and Nick will get a call from Nate Hastings (Sean Dominic) telling them Faith Newman (Alyvia Alyn Lind) was in an accident. When they get to the hospital, they’ll find out she’s got internal injuries but no internal bleeding. And as they suspected, Nate will say there was alcohol in her system.

They’ll ask Nate who found her and he’ll say a stranger brought her to the ER but then disappeared. When Rey Rosales (Jordi Vilasuso) arrives, he’ll say Faith lost control of the vehicle and hit a tree. Sharon will mention that a stranger brought her in. “Thank God for this man, whoever he was,” Sharon will say. “He saved Faith’s life.” Could the mystery man have been Adam?

At Chance Comm, Billy will obsess over Ashland Locke’s (Richard Burgi) decision to award Cyaxares to Adam and Victor Newman (Eric Braeden). Lily will tell him he needs to let it go. Then she’ll arrange for a couple’s massage in her Grand Phoenix suite. Afterwards, she’ll leave the room and Billy will go behind her back and put in a call to Ashland.

Finally, Kyle will come clean to Jack Abbott (Peter Bergman) about his affair with Tara Locke (Elizabeth Leiner). But he’ll fail to mention that he is the father of her son. When Kyle warns him Ashland may suspect, Jack will go over a long list of payback the business tycoon has given out over the years.

Kyle will promise he’ll do whatever it takes to keep his dirty little secret from blowing up. However, Jack will tell him to stay away from Ashland. “If he calls you again you refer him immediately to me.” Kyle will be glad he told his father but will he come to regret leaving out one important detail – his son Harrison?