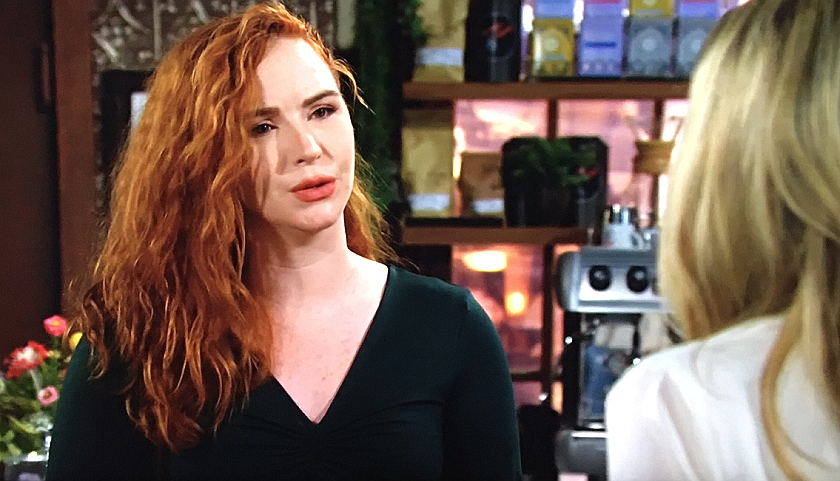 The Young And The Restless (Y&R) scoop for Tuesday, June 8 suggests Mariah Copeland (Camryn Grimes) will give Tara Locke (Elizabeth Leiner) a talking to.

Spoilers tease Mariah will eavesdrop as Tara is speaking with her lawyer. She’ll introduce herself as Kyle Abbott’s (Michael Mealor) friend. Tara will say she’s been warned that not everyone in Genoa City can be trusted. “Yeah, I mean why should you trust me any more than I trust you?” Mariah will say.

She’ll then accuse Tara of taking advantage of Kyle in New York. He and Summer Newman (Hunter King) had just broken up and he was pretty vulnerable. Tara will assure her she did not. Mariah will also mention that Kyle has been in love with Summer forever. “Summer is not my favorite person,” Mariah will say. “But she’s definitely Kyle’s.”

Speaking of Kyle and Summer, they’ll invite their parents to the Abbott estate to tell them the wedding is back on. Nick Newman (Joshua Morrow) will wonder why they changed their minds. “You can tell me that you’re happy for us,” Summer will say. Phyllis will frown and grab a huge pastry and bite into it. “Why don’t you just take a step back and adjust before you jump into this commitment,” Phyllis will say.

Meanwhile, Amanda will receive boxes of information that Denise Tolliver (Telma Hopkins) collected from her former foster parents. She’ll look through calendars and find her father’s name on one. It’s undeniable proof that he had found his daughter. Then later, she’ll tell Imani Benedict (Leigh-Ann Rose) she wants to change her strategy and to set up a meeting with their grandfather to discuss it.

Finally, Imani will run into Nate Hastings (Sean Dominic) at Crimson Lights. They’ll flirt and laugh and Elena will see them sitting together on the patio. Nate will introduce them and Imani will leave. Then Elena will sit with him and say she needs his advice.

She’ll tell him she got a job offer in Baltimore and she’s considering taking it. Nate will tell her he wasn’t expecting this news and it sounds like a job that would be hard to turn down. “So I guess my real question is,” Elena will say. “Can you think of any reason why I should turn it down?”