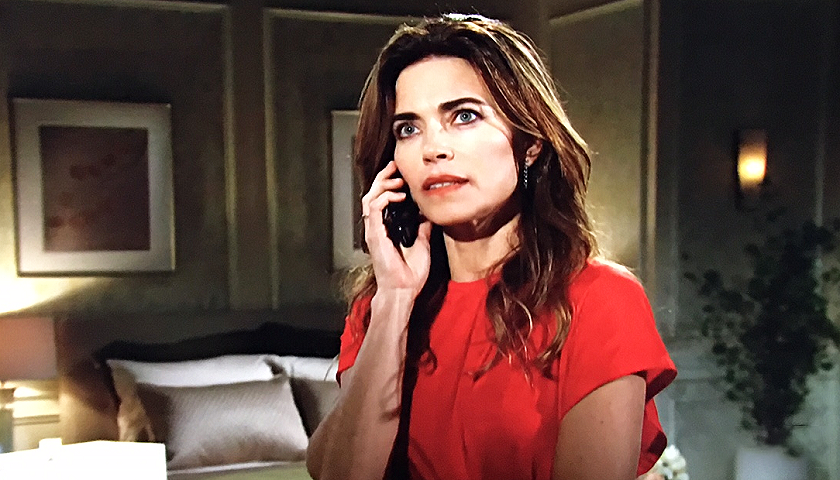 Spoilers tease Victor will ask Amanda to be honest with him about Sutton Ames (Jack Landron). “He’s not only your client, but your grandfather,” he’ll say. She’ll ask if Sutton told him. Victor will say Sutton had a slip of the tongue. “Remember how you helped Richard in his search for his child, well you’re looking at her,” she’ll admit.

At the Grand Phoenix, Amanda will get no answers from Naya Benedict (Ptosha Storey). She’ll tell her Sutton wanted to fire her and she accepts. Then Amanda will call Denise Tolliver (Telma Hopkins). “I have one last case for you to investigate,” she’ll say. “I want you to find out why my father was really killed.”

Meanwhile, Rey will have an eye-opening conversation with Chelsea. He feels like her recovery has been almost miraculous. He’ll ask her doctor to stay behind when she leaves to attend a session. “She seems so much different than she was a few weeks ago,” Rey will say. “It’s remarkable.”

At Crimson Lights, Sharon will say she spoke with Noah Newman (Robert Adamson). She’s pleased that he may be working with Adam and Victor at Newman Media. Adam will start talking about Chelsea and his son. But he’ll realize he shouldn’t be burdening her with his personal problems. Then he’ll mention he overheard her talking to Rey and he hopes they have a great trip.

Finally, Ashland will tell Victoria he wants to kiss her. She’ll smile but say they should proceed cautiously. However, she’s interested enough to see where it’s going. “Wherever it’s going,” Ashland will reply. “It’s probably going to be a short journey.”

Then, proving she’s definitely Victor’s daughter, Victoria will call the office after he leaves her hotel suite. “Can you put together everything we have on Locke Communications Group and send it to me?” she’ll say. “I want size, employees, liabilities, assets. Send me everything.” Armed with the knowledge that Ashland is dying, is Victoria planning a hostile takeover?