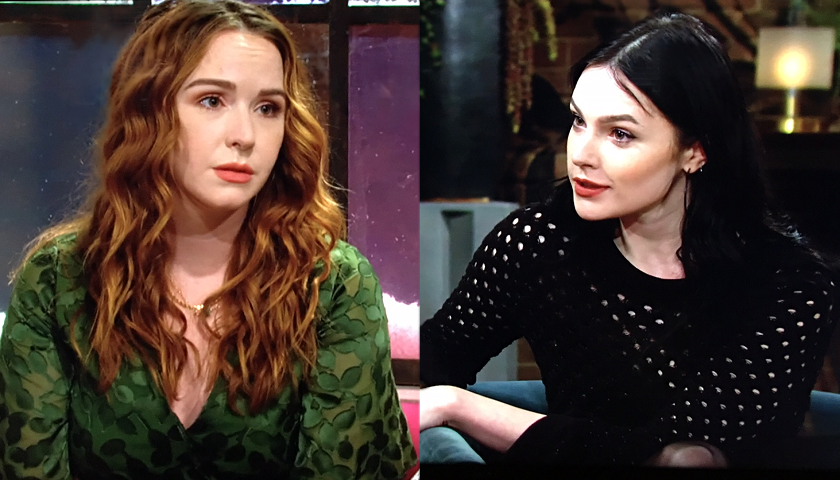 Also coming up, Faith Newman (Alyvia Alyn Lind) will be on the hot seat when her parents question her and Billy Abbott (Jason Thompson) will get mixed messages from Victoria Newman (Amelia Heinle). Plus, Gloria Bardwell (Judith Chapman) will continue to seek employment.

Spoilers tease Gloria will meet Lauren Fenmore (Tracey E Bregman) for coffee. She’ll tell her she’s desperate for a job. However, Lauren will point out she’s burned a lot of bridges in Genoa City. “You and I are family Lauren, won’t you please give me a chance to prove myself?” Gloria will ask.

Lauren will cave and say she’s thinking about promoting Sally Spectra (Courtney Hope), which would leave her needing a new executive assistant. Gloria will assure her she won’t cause her any trouble. “I’ll do my job and I’ll do it well.” Lauren will tell her she’ll think about it.

Over at Sharon Rosales (Sharon Case) place, she and Nick Newman (Joshua Morrow) will confront Faith with the vodka bottle cap. “You were here alone with Jordan…and it appears you were drinking vodka, this vodka,” Sharon will say. But Faith will deny it and Sharon will tell her they’re getting her a therapist. She’ll balk at the idea.

Then Nikki Newman (Melody Thomas Scott) will walk in and after a chat with Faith, she’ll suggest they go to the ranch so everyone can cool down. Later at Crimson Lights, Sharon will run into Jordan (Madison Thompson). Faith will overhear as Sharon tells her to back off her daughter and give her some space. A furious Faith will ask her mother if she’s no longer allowed to have any friends. “How could you do that!” she’ll yell as she storms off.

Meanwhile, Billy wants to come over to Victoria’s again to finish a board game with the kids. She’ll ask him not to. “I think it would be a mistake to get the kids used to the four of us being together.” He’ll be confused but she’ll say she wants to set clearer boundaries. As Villy argue, Lily Winters (Christel Khalil) will walk in and Victoria will leave.

Finally, Mariah and Tessa will discuss her possible surrogacy. “There’s going to be so many firsts…but the thing is, they’re not going to be our firsts,” Mariah will say. She’ll ask her girlfriend if that bothers her. Tessa will say she’s not the only one in the relationship who can get pregnant. “God, I could not love you more,” Mariah will tell her.

However, a sour-faced Abby Chancellor (Melissa Ordway) will show up and put a damper on their conversation when she tells them Chance Chancellor (Donny Boaz) is sterile. It looks like the surrogacy plans will be put on hold.