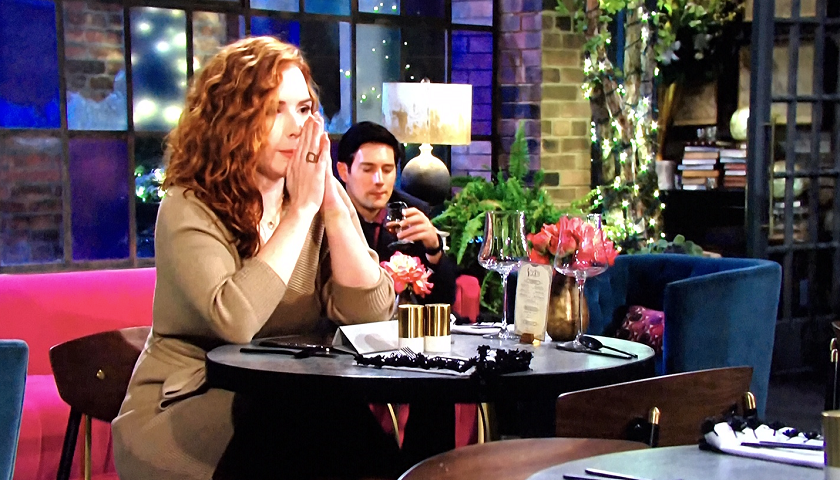 Young And The Restless Spoilers for Tuesday, February 25 suggest Jill Abbott (Jess Walton) will offer her son a position at Chancellor Industries.

Also coming up on Tuesday, Phyllis Summers (Michelle Stafford) will get an intriguing offer. And Mariah Copeland (Camryn Grimes) will ask Tessa Porter (Cait Fairbanks) if she’s sleeping with her ex.

At Crimson Lights, Amanda Sinclair (Mishael Morgan) will tell Rey Rosales (Jordi Vilasuso) that there’s been radio silence from Ripley Turner (Christian Keyes). Billy Abbott (Jason Thompson) will show up and Amanda will lay into him. She still blames herself and their involvement for what happened to Victoria Newman (Amelia Heinle). Billy will tell Amanda that he wished he’d listened to her. “I think the time for you to listen was weeks ago,” she’ll tell him. “When I told you we needed to stay away from each other.”

As she leaves the coffee shop, she’ll race by Elena Dawson (Brytni Sarpi) and Devon Hamilton (Bryton James). Devon will remark that Amanda erasing herself online likely had nothing to do with Colin Atkinson’s (Tristan Rogers) inheritance scheme. Then Chance Chancellor (Donny Boaz) will drop by their table and inform them that Colin was last seen in Luxembourg.

Billy will show up at the Chancellor Estate and he and Jill will discuss his latest breakup with Victoria. Jill will tell him he’s got to pick himself up and move on. She’ll then offer him a job at Chancellor, as head of the company’s social media department. But as usual, Billy’s feeling sorry for himself and will reject the offer. He’ll tell her that he lets everyone down who trusts him and leave.

Meanwhile, Abby Newman (Melissa Ordway) will offer to buy Phyllis’ shares in the Grand Phoenix. She’ll tell Abby she needs time to think it over, even though it seems like a low ball offer. A while later, someone will arrive with an envelope and Abby is served. It turns out she’s being sued by a former guest of the hotel. Phyllis will smile and tell Abby she should hand the Grand Phoenix over to her.

At Society, Mariah will tell Lindsay (Kirby Bliss Blanton) that Devon gave her the name of an employment recruiter. Theo Vanderway (Tyler Johnson) will arrive and sit beside her. “I’d be glad to put in a good word for you with my boss, for old times sake,” Theo will say. “Summer? No thanks,” Mariah will reply and will tell then him to get lost. But Theo doesn’t take the hint and will talk about Tanner Watts’ (Chase Coleman) great social media strategy. Then he’ll show Mariah a photo of Tessa with her ex.

Mariah will move away from Theo and start a video chat with Tessa on her tablet. But she’ll see both of them on her screen, and Tanner is shirtless. When he walks away, Mariah will ask Tessa if they’ve slept together and will slam the tablet down on the table. Theo will watch as Mariah leaves the restaurant with Lindsay.