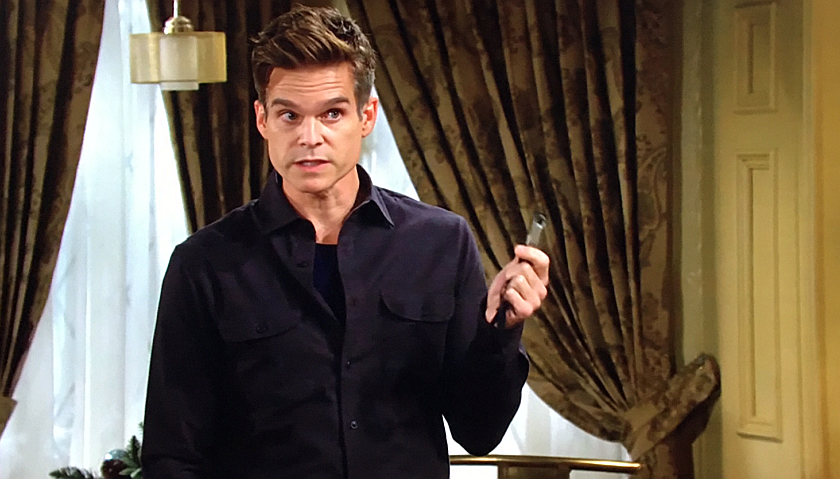 The Young And The Restless (Y&R) scoop for Tuesday, December 22 suggests Kevin Fisher (Greg Rikaart) will discover a secret.

Spoilers tease Lily will tell Billy they can’t go to New Orleans. Anything could happen so close to the holidays and he’d regret it if he missed out on spending Christmas with his kids. He’ll agree and tell her to keep her schedule open. Then he’ll rent out Society for the night, decorate it in Creole Style and have Lola Rosales (Sasha Calle) prepare a special menu. Lily will be impressed and the two will spend a special evening enjoying each other’s company and dancing the night away.

At Crimson Lights, Elena and Nate Hastings (Sean Dominic) will sit down for coffee and who will walk in? You guessed it – Devon. The three of them will look at each other awkwardly. “You guys don’t have to be so tense every time you see me,” Devon will say. “We all live in the same town and I hope we can just move on.”

Elena will walk away, then she’ll fantasize that she and Devon are still a couple, celebrating Christmas together. Devon will flash back to how he found out that Elena and Nate betrayed him by sleeping together.

Nate will suggest to Elena that they head out of town for a few days. She says she’ll think about it. Later, at Devon’s penthouse, Amanda will tell him she just got a call from her private investigator. He believes he’s found her birth mother.

Meanwhile, at the Chancellor Estate, Chance Chancellor (Donny Boaz) will sit in the living room, only to be greeted by a sour-faced Abby. He’ll ask what’s wrong. Abby will say she was hoping to surprise him on Christmas morning by telling him he’s going to be a daddy. But that’s not going to happen now.

Kevin and Chloe Mitchell (Elizabeth Hendrickson) will arrive to pack a few things. As they talk about children, Abby will storm off, with Chance following at her heels. Kevin will find a hidden thumb drive and he’ll plug it into his laptop. Gloria Bardwell’s (Judith Chapman) photo will pop up. He’ll open a couple of files that include some interesting information.

“The question is, how did Gloria get all this?” Chloe will ask. “And what is she going to do with it?” Kevin will respond. It looks like another great episode coming up! Keep reading The Soap Scoop for more Young And The Restless spoilers and news. And make sure you join our free Facebook Group.