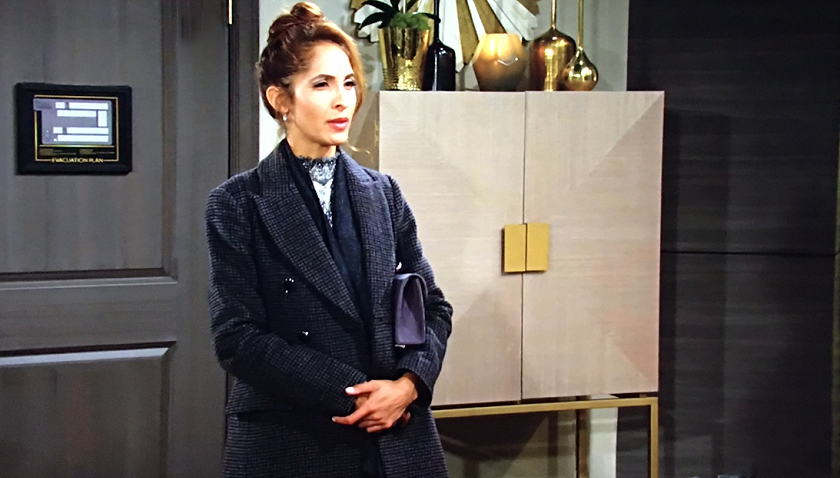 The Young And The Restless Scoop for Tuesday, December 15 suggests Lily Winters (Christel Khalil) will find an important clue.

Spoilers tease Nina will feel a little melancholy as she spends time with Abby Chancellor (Melissa Ordway) and Chance Chancellor (Justin Gaston). She’ll have a special Christmas gift for the newlyweds. It’s an angel that Katherine Chancellor (the late Jeanne Cooper) gave Chance when he was a child.

Over at Crimson Lights, Faith will get another bullying text but doesn’t tell Sharon Newman (Sharon Case). Lola will see her in tears and will find an excuse to take her up to her apartment. Faith will show the text to Lola who will tell her to ignore them and lean on her friends.

At the Grand Phoenix, Phyllis still feels bad about borrowing money from Nick Newman (Joshua Morrow). “I was the Phoenix rising from the ashes,” she’ll say. “That was supposed to be me.” He’ll tell Phyllis he didn’t give her the money for her to doubt herself.

Meanwhile, jailbird Billy will discuss his case with Amanda Sinclair (Mishael Morgan). She will agree to represent him again as long as he promises to tell her the truth and take her advice. Billy will say he has no problem with that.

Finally, Lily will hammer on Alyssa Montalvo’s (Maria DiDomenico) door. The reporter will open it and tell Lily she’s got five minutes. As Lily questions her about what she thinks she saw, Alyssa will become agitated. “You’re so sure he’s innocent?” Alyssa will ask.

Lily will ask her why she was at the crime scene in the first place. And Alyssa will abruptly tell Lily her five minutes is up. Less than a minute later, Rey Rosales (Jordi Vilasuso) will be at her door. He’ll say “we have a problem” and tell Alyssa they’re moving her right now. Hiding behind a post in the hallway, Lily will slip into the room and do a quick search. She’ll find a framed photo of Alyssa’s dad AJ and a pair of black gloves in a drawer.

Later, she’ll look AJ up online and find a photo of him wearing the same gloves. Lily will realize they are marksman gloves. But why would Alyssa be travelling with them? It looks like a great episode coming up! Keep reading The Soap Scoop for more Young And The Restless spoilers and news. And make sure you join our free Facebook Group.