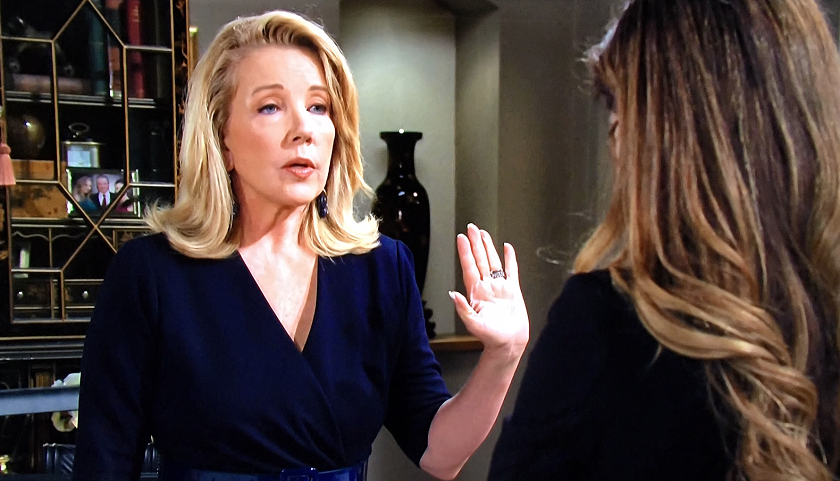 Nikki will try to broker peace between Victor Newman (Eric Braeden) and Victoria Newman (Amelia Heinle). Victoria is still furious with her father for letting Adam take over Newman Enterprises. When she arrives at the ranch, Nikki will advise her to speak with her father. “I would like the three of us to sit down together and sort out the situation with Adam,” Nikki will say. But Victoria will tell her mother she’s not interested

Nikki will track down Victor and ask him why he would put Adam in charge. It’s caused a rift in his relationship with their daughter and Nikki doesn’t like it. She’ll keep asking him questions until he tells her to stop and a furious Nikki will leave. Victor will then flashback to seeing AJ Montalvo dead in a barn.

Meanwhile, Nick will wake up with Phyllis in her hotel room. They will flirt and then the two of them will go at it like rabbits, as usual. Later, he will tell her he needs to visit his father. Phyllis will tell him to “stay strong” and they’ll arrange to meet for dinner later.

At Crimson Lights, Nick and Victoria will watch Adam’s live press conference and scowl. Victoria will tell Nick all about Adam’s blackmail scheme and say she’s still surprised that Victor gave in. He’ll advise his sister to steer clear of Adam for the time being and let him deal with their despicable brother.

Chelsea will also be watching Adam’s live announcement while she’s at Society.  Phyllis will arrive and tell Chelsea that Adam must have done something loathsome to have gotten away with this latest stunt. When Chelsea mentions that at least she’s not going home alone, Phyllis will tell her she and Nick have reunited. The two women will then argue about which one of them hurt him more.

Finally, Nick will storm into Adam’s office at Newman and tell him he’s not going to get away with what he’s done. Adam will just smirk and tell his brother that he already has.