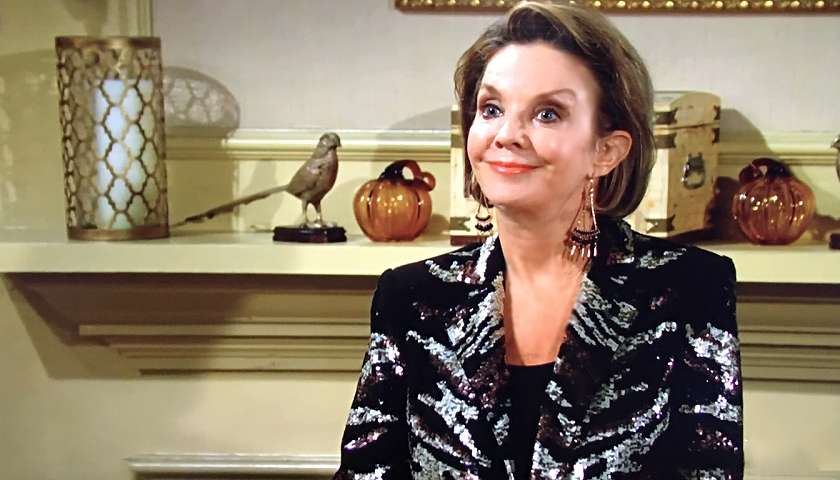 The Young And The Restless (Y&R) scoop for Thursday, October 22 suggests Gloria Bardwell (Judith Chapman) is hiding something.

Then they’ll interrogate her about why she’s back in Genoa City and what she’s hiding. As always, Gloria will dodge and bait. “Why are you both acting so suspicious?” Chloe Mitchell (Elizabeth Hendrickson) will take Gloria to Chancellor Park and when she returns she’ll tell Michael and Kevin they were right – their mother is definitely hiding something.

Also at Chancellor Park, Jack will tell Lauren he’s grateful she was able to find the Teardrop Of Love necklace, so he could present it to his mother in her final moments. Then he’ll return home with something special for his son and his sisters. He had the stone cut and made into jewelry for all of them.

Meanwhile, Elena will pack her things and tell Devon she had planned to be out of his penthouse before he got back. But everything she looked at reminded her of happy memories with him. “I still love you so much, Devon,” she will say. He will respond by telling her to leave her keys on the table.

At Crimson Lights, Amanda Sinclair (Mishael Morgan) will find Nate sitting at a table, having a coffee and nursing his wounded hand. He’ll tell her he feels bad for lying to her. She will say she’s in no position to judge him and she hopes he makes a full recovery. When Elena and Nate end up at the clinic, he will tell her what happened between them was something he’d wanted for a long time.

Finally, Kyle will tell Summer he’s been worried sick and ask her where she’s been. “You can cut the act Kyle,” she will respond. “I know what you’ve been up to.” She will accuse him of abandoning her and will bring up the texts he and Lola Rosales (Sasha Calle) sent to each other the night before their elopement. He’ll tell her she’s being irrational but she won’t have it. Is Skyle over for good?