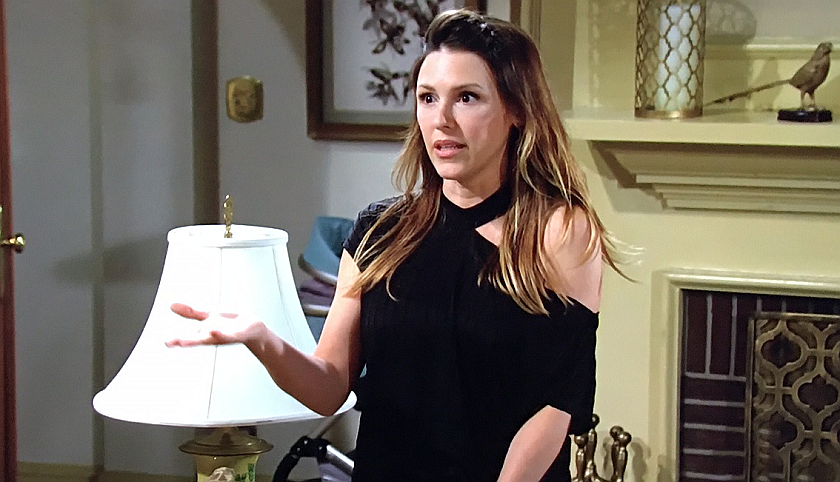 The Young And The Restless (Y&R) scoop for Thursday, November 5 suggests Theo Vanderway (Tyler Johnson) will show up at the Abbott estate for the reading of Dina Mergeron’s (Marla Adams) will.

Adam Newman (Mark Grossman) has Chelsea’s ID and her phone and will send a text to Chloe. “Need some time away to sort through some things RE: my new life without Adam. Sorry so sudden. Be in touch soon. C.” Chloe will tell Chance Chancellor (Donny Boaz) she’s had thousands of texts from Chelsea and she’s never signed off with “C.” Chance will then visit Adam and tell him if he has anything to do with Chelsea’s disappearance he will prosecute him “to the fullest extent of the law.”

Chelsea will bang on the locked door of the room she’s being held in. She’ll tell the person on the other side they’re going to be in big trouble when “the father of my child finds out.” Little does she know, the father of her child is the one who had her kidnapped!

Over coffee at Crimson Lights, Lauren will tell Sally she has a job for her. “It’s my executive assistant,” Lauren will say. “I know it’s a step down than what you’re used to but I actually think it’d be really good for you, to make contacts and get your feet wet.” Sally will happily accept the position.

Finally, Kyle Abbott (Michael Mealor) will be annoyed when Theo shows up for the reading of his grandmother’s will. He’ll ask Theo why he’s there however, Jack Abbott (Peter Bergman) will stop him. “Theo is here as my guest.”

Dina left instructions for Abby Newman (Melissa Ordway) to read the document out loud.  Not surprisingly, she’ll leave the bulk of her estate to be divided by her three children. Kyle will be left her extensive art collection. Abby Newman (Melissa Ordway) will be bequeathed Dina’s Paris apartment. Theo will get a pen that his grandfather Stuart Brooks had given Dina.

Kyle will smirk but Theo will say it was never about the money, he just wanted to be part of a family. But later at Society, Theo will invite Sally to join him at the bar. He’ll tell her he was “cheated out of my inheritance.” She’ll ask him if he’s okay. “Don’t worry about me,” Theo will reply. “This isn’t over yet.”

It looks like a great episode coming up. Keep reading The Soap Scoop for more Young And The Restless spoilers and news. And make sure you join our free Facebook Group.

B&B Poll: Does Liam Deserve To End Up Alone?