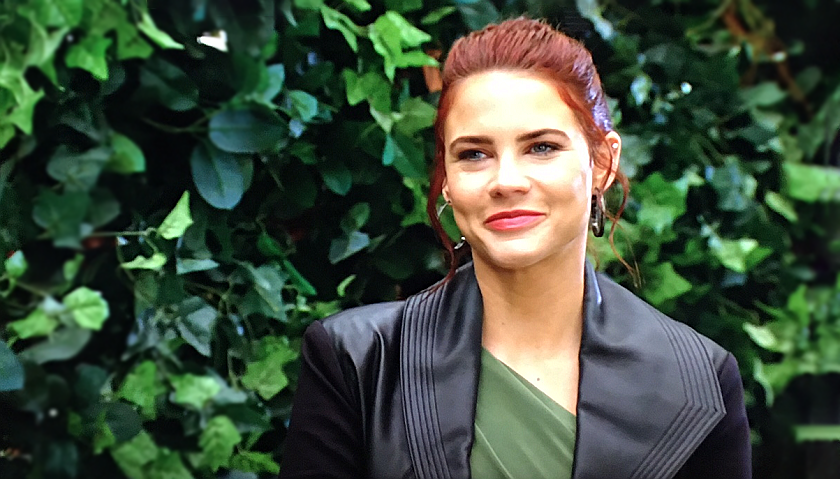 The Young And The Restless (Y&R) scoop for Thursday, May 27 suggests Sally Spectra (Courtney Hope) will make a deal with Ashland Locke (Richard Burgi).

Spoilers tease Ashland will tell Sally to get in touch with his office. However, she’ll get his attention when she asks if he wants to know where his wife and son are. But she wants something in return. “If you bring me useful information about the whereabouts of my son, I might be tempted to reciprocate,” he’ll tell her.

After Sally leaves, Ashland will spot Victoria. He’ll ask her to join him for lunch. They’ll talk about their children and Billy will see them together. Then Ashland will get a call and leave. Billy will approach Victoria and ask her what she’s doing with Ashland again. She’ll tell him it’s none of his business.

At the Abbott estate, Summer will tell Kyle that with everything that’s happened, she’s been forced to make a decision. “I want to put our wedding plans on hold.” But Kyle will have the nerve to ask her if she’s running away again. She’ll say no and Jack will walk in. He’ll tell them tell Ashland tried to warn him about Tara.

Summer will get a call and run out and Kyle and Jack will ask Tara if Ashland has any dirt on her. However, Tara will say she has nothing to hide. Later, the doorbell will ring and Kyle will see Sally standing there. “What do you want?” he’ll ask. Then she’ll sit down, spot a toy on the coffee table and make up an excuse about Fenmores. Jack will tell her he’ll deal with it and ask her to leave.

At Chancellor Park, Sally will meet with Ashland. She’ll tell him she knows where Harrison Locke (Kellen Enriquez) is. She’ll mention a stuffed fox made out of corduroy. He’ll say it’s his son’s favorite toy. “Where is he?” Ashland will ask. Sally will tell him if he’ll help lure Summer out of Genoa City with a great job offer. He’ll ask her if her motives are vindictive. “Possibly,” she’ll reply.

Ashland will mention that getting Summer out of town will cause pain for Kyle, so he likes the idea. He can make one phone call and it’ll be done. “So our goals are aligned,” Sally will say. But will Sally tell Ashland that Tara and Harrison are living at the Abbott estate?