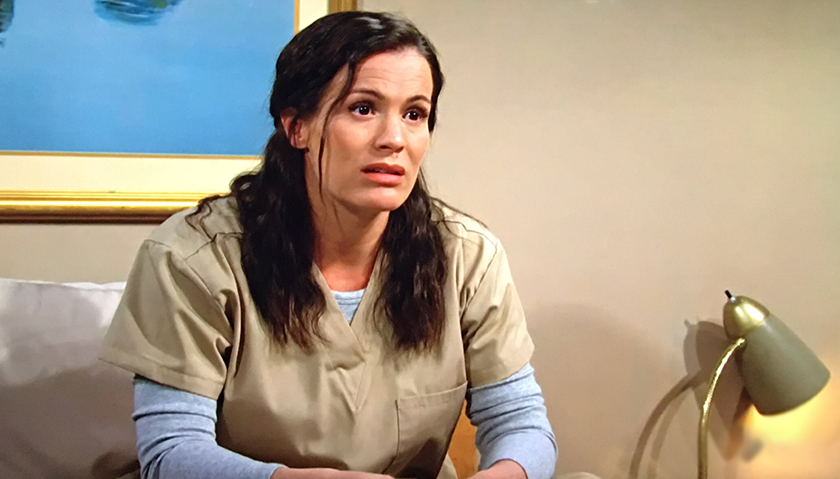 The Young And The Restless (Y&R) scoop for Thursday, May 20 suggests Chelsea Newman (Melissa Claire Egan) will apologize to Rey Rosales (Jordi Vilasuso).

Spoilers tease Nick will show up at Adam’s door. He’ll ask how he’s doing since the transplant surgery. He’ll also tell him he can’t thank him enough for saving his daughter’s life. They’ll watch a baseball game together and Adam will say it’s boring. He’ll offer to teach Nick how to play poker. Then Victor Newman (Eric Braeden) will walk in and smile. He’ll say he’s happy they’re spending time together.

At Society, Victoria will ask Ashland why he signed a contract with Victor when he had told her they had a deal. Then she’ll ask if he came alone or if his wife Tara Locke (Elizabeth Leiner) is with him. He’ll make a face and Victoria will comment that she struck a nerve. He’ll question her about painful times in her past however, she won’t want to talk about it. As he leaves, she’ll tell him there’s no hard feelings.

Speaking of Ashland, Phyllis and Summer will discuss he and Tara. “You don’t want to get mixed up in their marital mess,” Phyllis will advise her daughter. Then she’ll ask why Tara showed up at she and Kyle Abbott’s (Michael Mealor) engagement party. “Is this little boy Kyle’s?” she’ll ask. A tearful Summer will shake her head yes.

Meanwhile, Kevin Fisher (Greg Rikaart) will ask his wife to come clean about what happened to Rey. “Did you help Chelsea poison Rey and frame Adam?” Chloe will admit she did it but didn’t know about the poison until after she planted it. They’ll see Rey, who’ll walk over and ask her if she knew Chelsea had been faking her paralysis. But Chloe will be saved from answering when Rey gets a call from Chelsea’s doctor.

Finally, Chelsea will ask her doctor when she can get out. He’ll say she needs time to heal. She’ll admit she’s still angry with Adam and Sharon Rosales (Sharon Case). “If I want to turn things around I know what I need to do.” Then she’ll insist on seeing Rey so she can apologize.

When Rey arrives he’ll remind her she still hasn’t given an official statement. She’ll tell him she’s sorry. What she did wasn’t an attack on him, it was just a means to an end. “All I know is I was out of my mind and you suffered for it.” Then Rey will ask her why she didn’t reach out for help once she was able to communicate. But how will she respond?

Your escape is here! 😍👏 #YR is new weekdays on CBS. Watch the latest The Young and the Restless episodes for free on @CBS or subscribe for more on @paramountplus. https://t.co/V68o9XNObb