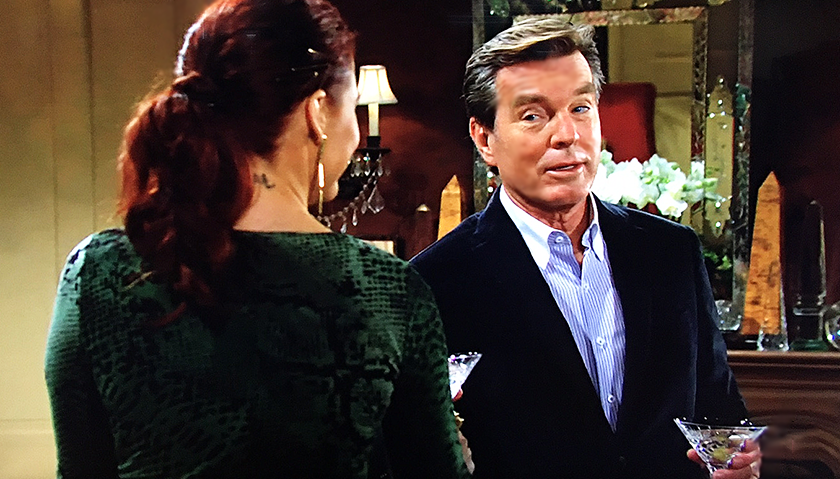 The Young And The Restless (Y&R) scoop for Thursday, March 4 suggests Jack Abbott (Peter Bergman) will have Sally Spectra (Courtney Hope) over for dinner.

Spoilers tease Christine Williams (Lauralee Bell) will arrive at the Chancellor estate with the contracts. Abby will announce she’s going to ask Mariah Copeland (Camryn Grimes) and Tess Porter (Cait Fairbanks) to move in. Nina Webster (Tricia Cast) will caution her. If something were to happen to the baby, things could get awkward. Abby will also speak to Jill Abbott (Jess Walton) and she’ll agree with Nina. Despite the objections, Abby will decide to invite Teriah to move in.

At Crimson Lights, Devon will run into Elena Dawson (Brytni Sarpi). He’ll say he’s sorry what happened between them has ruined things between her and Nate Hastings (Sean Dominic). Elena will tell him Nate is “waiting for me to tell him that you’re out of my system.” She’s not sure he is. Devon will say he can’t get their night together out of his head either.

Speaking of Nate, Amanda will see him drinking alone at the Grand Phoenix. She’ll join him and ask how it’s going with Elena. But he’ll quickly change the subject and ask about Devon. She’ll tell him things are going well. In fact, she can’t believe how well 2021 is going. “I’m just waiting for the other shoe to drop, you know what I mean?” Nate does in fact know what she means. He also knows Devon is keeping a secret from her and when it comes out, that proverbial shoe will indeed drop.

Meanwhile, Summer will ask Kyle Abbott (Michael Mealor) if the picture he was looking at the other day was his kid. “I didn’t want to say anything,” Kyle will tell her. He was terrified of losing her. Then he’ll talk about how ruthless Ashland Locke (Richard Burgi) is. “If he finds out the truth, there’s no telling how far he will go.”

Summer will tell him he should confide this to his father. Then she’ll say she needs time to think. But she won’t take long and when she returns to their suite she’ll tell him she’s with him. “Because we’re in this together, no matter what.”

At Jabot, Sally will give Jack a present, a new Fenmores jacket. He’ll try it on and she’ll say he looks “drop dead gorgeous.” He wants to repay her. “How about we have dinner tonight at my place?” When she arrives, he’ll tell her the jacket was a hit. Then they’ll toast each other. “To my new fashion guru,” Jack will say. “Don’t tempt me,” Sally will tease.

One Thought to “Young And The Restless Daily Scoop Thursday, March 4: Jack Has Sally Over For Dinner – Summer Stands By Her Man – Elena Can’t Get Devon Out Of Her Head”