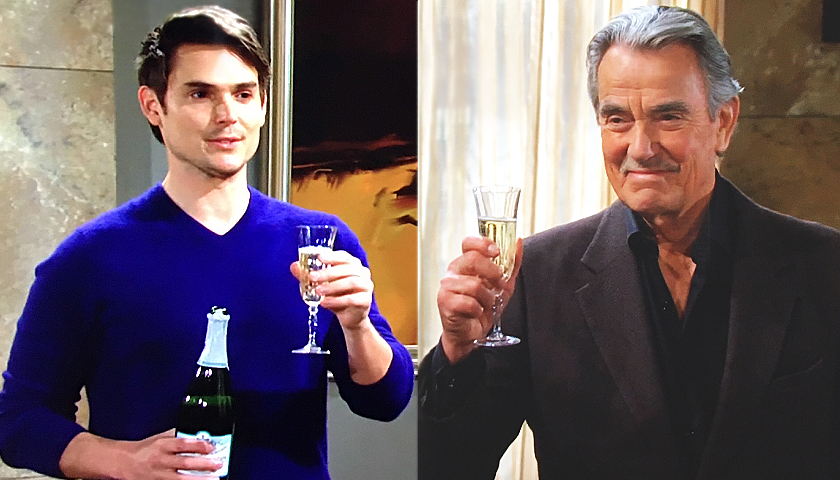 Spoilers tease Ashland will call Victoria, who will be disappointed to learn she won’t be the new owner of Cyaxares. Then Billy will get his rejection call. “That son of a b**ch!” Billy will say after he hangs up. Lily will tell Billy to calm down and not to focus on old feuds. He’ll tell her she sounds like Victoria.

Speaking of, Billy will run into his ex at Crimson Lights. He’ll tell her not to worry about him or Chance Comm, they’re both rock solid. She’ll say she’d like to forget about their last meeting. “I don’t want you to feel bad,” Billy will say. “We’re fine. We’re good.”

Meanwhile, Victor and Adam will thank Ashland for his confidence in them. “Between you and Victor, I have no doubt that my soon to be former company will be in good hands,” he’ll tell Adam. After he leaves, Adam will say he’d like to see the look on Victoria and Billy’s faces when they found out. Victor will tell him not to gloat.

The nurse will wheel in Chelsea Newman (Melissa Claire Egan). “What I wouldn’t give to jump out of this chair and tell you both off,” she’ll think to herself. “But, I need to reign it in just a little bit longer. Then you’ll pay.” When Adam leaves, she’ll text Chloe Mitchell (Elizabeth Hendrickson). She has something she needs her friend to do.

At the Grand Phoenix, Ashland will watch suspiciously as Tara Locke (Elizabeth Leiner) has words with Kyle. She’ll tell Kyle the trip has been stressful and she can’t wait to leave Genoa City. Ashland will walk up to them and she’ll tell her husband she’s ready to go home.

Sally will walk in and make a sarcastic remark to Kyle. But Summer Newman (Hunter King) will rescue him. Phyllis will spot Sally and give her a piece of her mind. “Everyone in town knows that Jack is out of your league,” she’ll tell her. Sally will respond by saying she knows of Jack’s romantic history and she believes she is certainly an upgrade. Will these two fiery redheads ever get along?