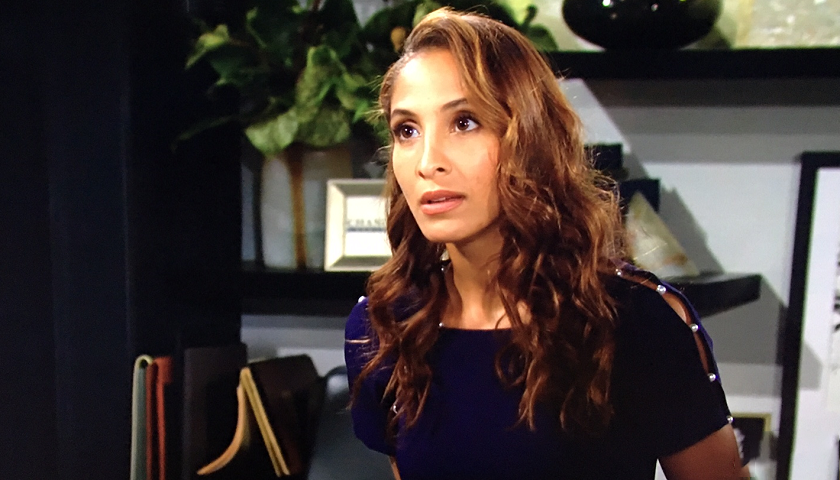 Spoilers tease Amanda will describe how her mother stood her up to Devon Hamilton (Bryton James). She’ll tell him she’d like to show up on Naya’s (Ptosha Storey) doorstep in Illinois but won’t. Then later, she’ll get a shock when her sister appears at her hotel room door and asks her why she’s harassing her mother.

Meanwhile, Summer will be packing her bags, in anticipation of her trip to LA. She invites Kyle to go with her, but he’s worried. If she digs into Sally’s life, it could get back to her, he’ll say. But later, when Kyle runs into Sally at the Grand Phoenix, he’ll become a lot more suspicious when she’s sweet as sugar to him.

At Jabot, Sally will thank Jack for going to bat for her with Summer. Then she’ll describe some of the stunts she pulled in LA, including a food fight with Steffy Forrester (Jacqueline MacInnes Wood) and crashing a Forrester wedding. Jack will tell her about how he ended up in jail after Nick Newman’s (Joshua Morrow) bachelor party.

When Summer shows up, she’ll tell Jack she spoke with her rival and he’ll praise Sally. Summer will comment that she’s really gotten to him. “If I can help channel her considerable drive into something positive, I look at that as a wonderful opportunity,” Jack will say.  When she and Kyle meet later, he’ll tell Summer he’s changed his mind and is coming with her to LA. “That woman can’t be trusted,” he’ll say.

Finally, Adam Newman (Mark Grossman) will storm into Chance Comm and tell Billy and Lily that Chelsea Newman’s (Melissa Claire Egan) condition is on them. And he’ll ask them not to publish anything about her for Connor Newman’s (Judah Mackey) sake. But his plea will have the opposite effect on Billy, who will want to publish an article about how Adam caused Chelsea’s fall.

But Lily is dead set against it. She’ll say maybe Adam was right. “Maybe you are obsessed.” Then she’ll tell him they’re not going run an article about Chelsea. Later, Billy will admit he has a blind spot when it comes to Adam. And Lily will say they need to be honest with each other. “Can we work together and be together?” Will Lily and Billy’s budding  relationship be over before it’s barely begun?