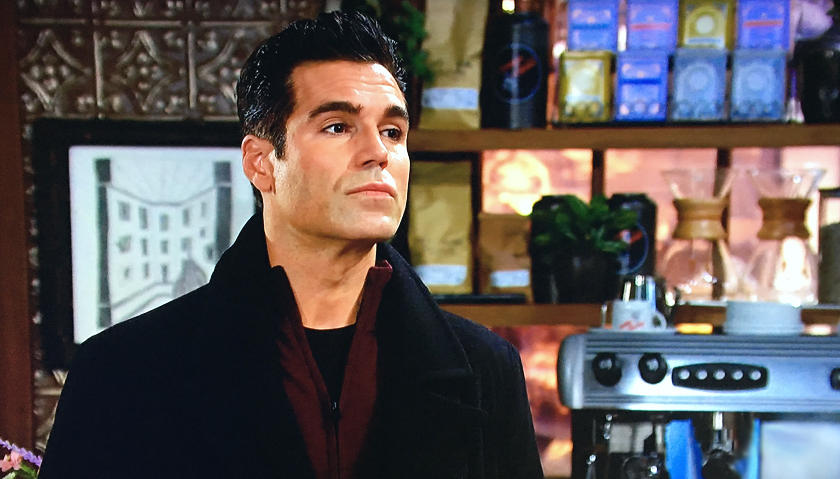 Also coming up, Sally Spectra (Courtney Hope) will question Summer Newman (Hunter King) about LA and Gloria Bardwell (Judith Chapman) will be looking for a job. Plus, Devon Hamilton (Bryton James) has a question for Elena Dawson (Brytni Sarpi).

Spoilers tease Sally will ask Summer what she learned on her trip. “I could spell it out for you but I don’t think it’s really necessary,” Summer will say. Sally will comment that she’d like to put the past behind them and move on. Summer will agree and tell her whatever she did in the past can stay there as far as she’s concerned.

At Devon’s penthouse, Elena will drop by with a courier package that was delivered for him to the clinic. He’ll invite her in and she’ll tell him she hopes they can eventually be friends. He’ll say he doesn’t think it’s impossible. Then he’ll ask if she had feelings for Nate Hastings (Sean Dominic) before they slept together. She doesn’t know how to answer and she’ll leave. But a few minutes later she’ll appear at his door again, saying her car won’t start.

Meanwhile, Gloria will show up at Jack Abbott’s (Peter Bergman) door. She’ll express her condolences about Dina Mergeron’s (Marla Adams) passing. Then she’ll try to hit him up for a job. He’ll tell her there’s nothing available. So later she’ll turn to Lauren Fenmore (Tracey E Bregman) and tell her she wants to work for her.

Finally, Sharon will tell Rey that Adam Newman (Mark Grossman) wants her to treat Chelsea Newman (Melissa Claire Egan). Rey will find it hard to believe Chelsea would want that. “So let me get this straight,” he’ll say. “Adam gets to torture his fiancé by bringing you along as her therapist.”

He thinks Sharon should “stay the hell out out of it,” but he’ll say it’s her call to make. “I know it’s my call,” Sharon will reply sarcastically. “I appreciate you allowing me to make it.” Nick Newman (Joshua Morrow) will show up and ask her if they can discuss Faith Newman (Alyvia Alyn Lind). They’ll agree that she needs to see a therapist.

Then Mariah Copeland (Camryn Grimes) will arrive and unburden Abby Chancellor’s (Melissa Ordway) surrogacy request on Sharon. “This is a life changing decision,” Sharon will advise her. “But I just want you to ask yourself one question. How would you feel, carrying a child that you will not raise?”