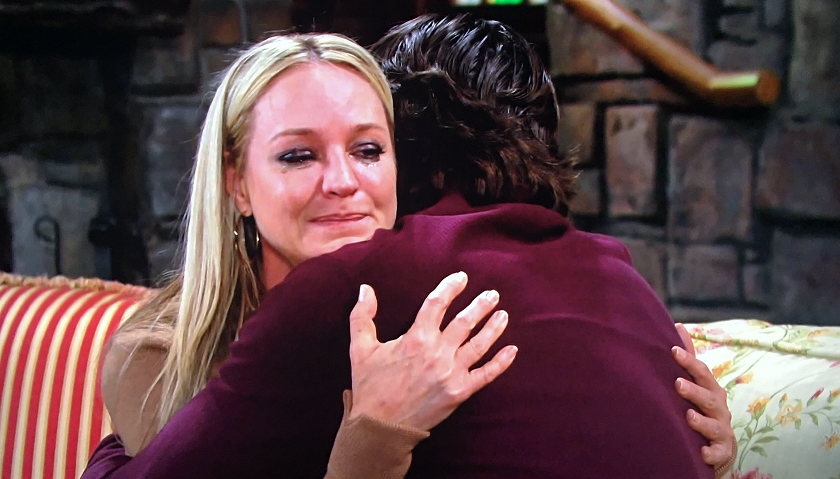 Young And The Restless spoilers for Thursday, January 16 reveal that Rey Rosales (Jordi Vilasuso) will accompany Sharon Newman (Sharon Case) to the breast cancer center. Sharon is scared and will ask the doctor if she can survive it.

Spoilers tease Sharon’s doctor will tell her there’s no guarantees when it comes to cancer. But, she’s got stage II and does have a “strong chance” of beating the disease. She will recommend surgery and chemotherapy.

At Sharon’s place, Nick Newman (Joshua Morrow) will try to soothe Faith Newman (Alyvia Alyn Lind).  He tells her he will talk to Sharon to find out what’s going on. Faith just wants to know her mom is going be okay.

“I really hope I can bring you that good news,” Nick will say.

Meanwhile, on Tanner Watts’ (Chase Coleman) jet, Tessa is talking to Mariah on the phone. She’ll play a song for her girlfriend, and Mariah will say it should be a hit. She’s at Society and spots Summer Newman (Hunter King) as she walks by.

Mariah realizes Summer is troubled about something and Summer tells her that if Kyle Abbott (Michael Mealor) isn’t careful when it comes to Theo Vanderway (Tyler Johnson), his whole marriage could implode. Mariah will tell Summer she’ll have a chat with Kyle.

At Crimson Lights, Lily will join Billy on the patio. She’ll ask him how everything’s going in his world but realizes something’s wrong. She will ask him if he’s okay but Billy will turn the question back on her. Lily will say she’s moving on with her life and is in a good place.

Phyllis will be at the Grand Phoenix and will proposition Chance again. She tells him he should hire her, as she’s an expert at marketing. Abby Newman (Melissa Ordway) then arrives and will warn Chance that Phyllis is a cobra.

Back at Sharon’s place, Nick knocks on her door. She doesn’t want to let him in but he insists. He will tell her that Faith found the note about the breast cancer center. Sharon will break down and tell him she has cancer.

It looks like another great episode is coming up. Keep reading The Soap Scoop for more Young And The Restless spoilers and news. And make sure you click here to join our free Facebook Group.