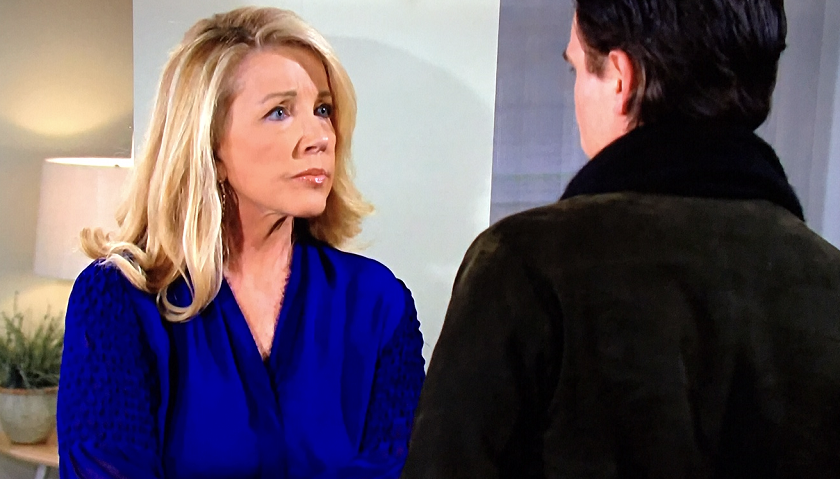 Also coming up, Kevin Fisher (Greg Rikaart) will be asked by Devon Hamilton (Bryton James) to crack a code on his cell phone and Victoria Newman (Amelia Heinle) will awaken from her coma.

At the end of Wednesday’s episode, Billy was sitting on the rooftop at the Grand Phoenix. Was he feeling sorry for himself? Of course he was. Was he considering jumping off the roof? Perhaps. Billy Boy, as Victor Newman (Eric Braeden) likes to call him, is a an imbecile who’s been acting more like a 16-year-old than a grown man these days. And on Thursday, Nikki’s going to set him straight.

She’ll be with Victoria in her hospital room and step outside for a moment. Billy will arrive and stroke Victoria’s head and tell her he loves her. Just then, Victoria will open her eyes. “Get away from me,” she’ll say, just before Nikki reenters the room. As Nikki soothes Victoria, Nate Hastings (Sean Dominic) will appear to examine her.

Outside the room, Nikki will tell Billy he’s not welcome and she does not want him anywhere around her daughter, especially at the hospital. “Obviously, you did not inflict this particular wound but you have hurt Victoria many times,” she will tell Billy. “And take it from me, one addict to another…you need therapy or at least an honest conversation with your sponsor.”

Meanwhile, at Crimson Lights, Devon will get an anonymous text and suspects it’s from Colin Atkinson (Tristan Rogers). He will call Chance Chancellor (Donny Boaz) and ask him to meet him. When Chance arrives, Kevin will already be there, working on his laptop as he tries to crack the code. And within minutes – voila – he’s done it. It’s an offshore account with a total of $2.475 Billion. Devon is shocked, as it looks like Colin is giving him his inheritance back.

He’ll also be surprised, as Colin doesn’t part with money easily. The three men will head to the Chancellor Estate, to update Jill Abbott (Jess Walton). She too has received a text from Colin, telling her that travelling around the world without her has been lonely. He also wants Devon to back off and he agrees he will.

Jill, however, is not so forgiving and will say she is done with Colin for good. But later, she’ll tell Chloe Mitchell (Elizabeth Hendrickson) that she had never felt more alive when she was with Colin.

Finally, Devon will head to Society, where he’ll sit down with Nate and Elena Dawson (Brytni Sarpi) and tell them his inheritance money has been returned. Even though they’re thrilled for him, after Nate leaves, Elena will ask Devon what’s wrong. He’ll tell her Colin’s text talked about how money can make someone crazy and “something about it struck a chord with me.” Then he’ll say he wants to be more effective with who he helps in the future.