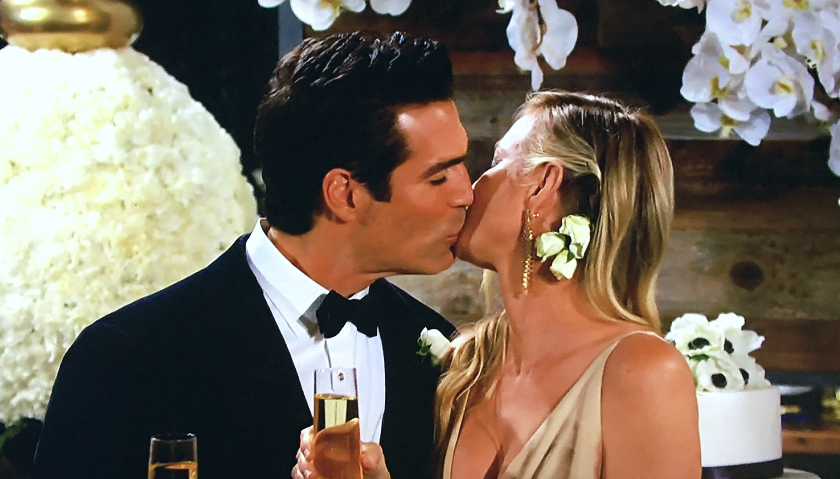 Spoilers tease the wedding ceremony will get underway, as Adam watches. Phyllis Summers (Michelle Stafford) will come up behind him and ask why he’s there. He’ll tell her he’s seen what he needed to see. He knows Sharon has had a rough year and he wants her to be happy, so he’s going to leave. “Does Chelsea know you’re here?” Phyllis will ask.

The happy couple will say their vows to one another and Arturo Rosales (Jason Canela) will pronounce them man and wife. The wedding guests will toast them and Faith Newman’s (Alyvia Alyn Lind) friend Jordan (Madison Thompson) will arrive. Faith will trick Nick Newman (Joshua Morrow) into letting her stay at Jordan’s place. Then later, she’ll show her the water bottle full of vodka. “Genius,” Jordan will say. “You finally came through.”

At the penthouse, Chelsea will wake up on the couch, calling for Adam. Then she’ll grasp the back of her head in agony. Adam will show up later and find her lying on the floor. The EMT’s will arrive and Adam tells them Chelsea’s situation. Once he’s at the hospital, Elena Dawson (Brytni Sarpi) will tell him Chelsea’s aneurysm burst and doctors were doing all they could.

Meanwhile, Devon is spending his New Years Eve alone at home. He’s having takeout and cracks open a beer as his doorbell rings. Amanda is standing there and he will invite her inside. She’ll look around. “This is pretty sad,” she’ll say and they’ll laugh. She’ll tell Devon she doesn’t want to be alone with her thoughts. “That’s perfect cause we can be alone together,” he’ll say.

They’ll have a nice chat, until Devon hears a commotion in the hallway. He’ll see the EMT’s taking Chelsea out on a stretcher, with Adam close behind. When he comes back into the apartment, he’ll be shook. As the fireworks go off, signaling the end of another year, he’ll say “yeah, it’s 2021. We missed it.” Amanda will head out, leaving Devon alone with his thoughts.

The Soap Scoop wishes everyone a very Happy New Year! Keep reading The Soap Scoop for more Young And The Restless spoilers and news. And make sure you join our free Facebook Group.