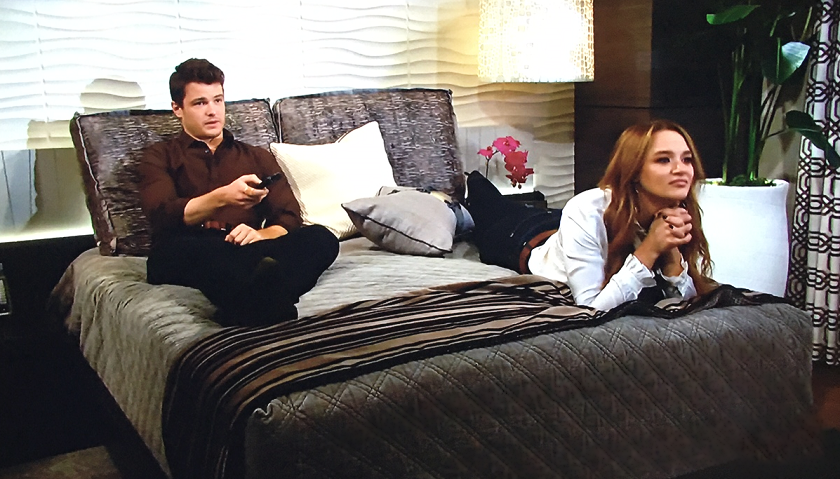 Spoilers tease Abby will think Chance is pranking her when they arrive at their honeymoon suite. She’ll tell Chance it was funny but she wants to see the real room now. He’ll look nervous as he tells her the pictures online looked a lot different. “My very handsome detective husband got ripped off,” she’ll say laughing.

Abby will do her best to redecorate their “suite” by covering up the old furniture and the lamps. They’ll be relieved that there’s champagne in the bar fridge and will they’ll pour some. When Chance opens a cupboard, assuming there’s a murphy bed inside, instead he’ll find an air mattress. “Make me a promise,” Abby will say, smiling. “The next time we have to stay at a hotel – I’ll make the reservation.”

At the Grand Phoenix, Sally will spy Billy sitting alone in the Grand Phoenix bar area and she’ll join him for a drink. She’ll introduce herself and tell him she ran Spectra Fashions in Los Angeles. Billy will ask her how she went from running her own fashion house to being Lauren Fenmore’s (Tracey E Bregman) “gopher.”

Lily will show up, which will end their conversation. They’ll discuss the Chabbs wedding and how Victor Newman (Eric Braeden) had his son committed to a mental institution. Billy will wonder if Adam Newman (Mark Grossman) still has minions doing his bidding and if he’s being followed. He’ll suggest to Lily that someone should put him up for the night to keep him safe.

Finally, after Kyle gets back from the wedding, he and Summer will decide to watch a movie in their hotel room. He’ll choose one of Dina Mergeron’s (Marla Adams) favorites, The Awful Truth, starring Cary Grant and Irene Dunne. “What the heck Kyle,” Summer will say as it begins. “It’s in black and white. Please don’t torture me like this.”

When the Wi-Fi goes down, they’ll head over to the Abbott estate to watch it and Jack Abbott (Peter Bergman) will join them. Summer will pause the film near the end. “Now I know why you wanted me to watch this movie – this is us,” she’ll say to Kyle. Jack will chuckle and when Summer leaves the room, he’ll tell his son he’s proud of him for not giving up.