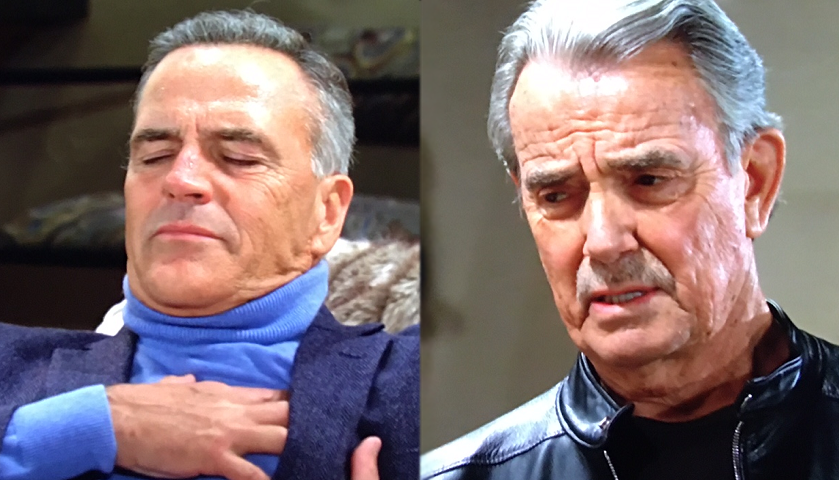 The Young And The Restless (Y&R) scoop for Thursday, April 22 suggests Ashland Locke (Richard Burgi) will learn the true meaning of the word ruthless.

Spoilers tease Lola will run into Nate Hastings (Sean Dominic) at Crimson Lights. She’ll thank him for saving Rey’s life and invite him to Society so she can cook him lunch. She’ll also make sure Elena Dawson (Brytni Sarpi) shows up. As they’re eating, Elena will say she had nothing to do with it. Lola will apologize to Elena after Nate leaves.

Meanwhile, as Kyle prepares to tell Ashland he slept with his wife, Tara Locke (Elizabeth Leiner) will interrupt them. Ashland will ask what she’s doing in Genoa City. “Why are you so upset with me?” she’ll respond. Before Kyle gets to say anything else, Ashland will say he’s late for a meeting and storm off.

Jack will ask Kyle what he thought he was going to do. He’ll say he was going to tell the truth and can’t believe Tara got in the way. “Consider yourself lucky,” Jack will say. “She may have just done you a huge favor.” Then he’ll get a call and tell Kyle they need to get back to Jabot ASAP.

Once they’re there, Jack will field dozens of calls. Jabot’s operations in Hartford, Chicago and San Diego have all been shut down. Kyle will tell his father it’s a calculated attack by Ashland. Jack will agree.

Young And The Restless Scoop – Victoria Newman Throws Around Accusations

Finally, Victoria Newman (Amelia Heinle) will show up at the ranch and make an accusation against Victor Newman (Eric Braeden). She’ll tell him Ashland is rethinking the deal with Newman, and she blames him. Then she’ll ask why he’s trying to undermine her and she’ll leave.

Ashland will arrive, out of breath and perspiring. Victor will ask if he’s okay. He’ll ask Victor for a double bourbon. Then he’ll say he won’t sign the deal with Victor and he’ll clutch his chest. “What the hell is the matter with you?” Victor will ask. Ashland will say he thinks he’s having a heart attack and asks Victor to call for help. “Well if you want help, I suggest you sign the damn contract,” Victor will tell him.

But will Victor be willing to let Ashland die if he doesn’t sign it? It looks like a great episode coming up! Keep reading The Soap Scoop for more Young And The Restless spoilers and news. And make sure you join our free Facebook Group.

Tara Locke is in town today! 👏 Ready to see what happens next on #YR? Give us your predictions! pic.twitter.com/LBzCCLlqzh