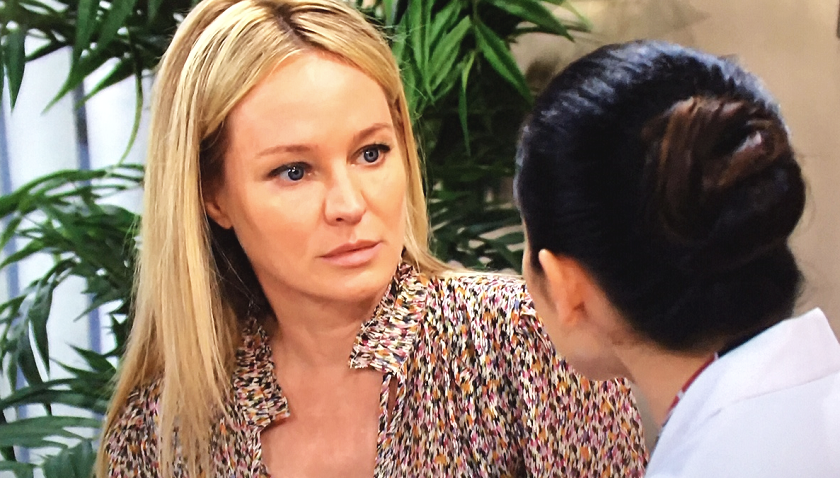 The Young And The Restless (Y&R) scoop for Thursday, April 2 suggests Victoria Newman (Amelia Heinle) will go back to work.

Also coming on Thursday, Sharon Newman (Sharon Case) will learn her tumor hasn’t shrunk, Amanda Sinclair (Mishael Morgan) will take a chance and Adam Newman (Mark Grossman) will blackmail his father to get what he wants.

At the hospital, Sharon will get the results of her breast scan. As the doctor begins speaking, her voice will grow fainter. Later, at Crimson Lights, Sharon will throw sugar all over the floor as Rey Rosales (Jordi Vilasuso) walks in. He’ll know her test results were not good.

Back at her place, Rey will comfort her as she cries in his arms. She’ll tell him the tumor has shrunk but not as much as they’d hoped for and she is sure she’s going to lose her breast. “I don’t want this inside of me anymore!” Sharon will exclaim.

At Society, Adam will have dinner with Victor Newman (Eric Braeden) and they’ll chat about the farm in Kansas and how alike they both are. Things will get tense when Adam hands his father the manila envelope containing evidence that Victor killed AJ Montalvo. He’ll tell Victor he’s going to go to prison. His father will smirk and asks him what he wants.

Meanwhile, Victoria will head to Newman Enterprises where she’ll tell Nick Newman (Joshua Morrow) she’s back, as of today. Even though Nick is worried about her coming back to work so soon, Victoria will tell him she’s more than ready. “I couldn’t be more proud of you,” he’ll tell her. Then he will update her on what’s going on and they’ll high-five each other and hug.

Finally, Phyllis Summers (Michelle Stafford) will gush to Amanda about getting back together with Nick. She’ll encourage Amanda to start living her life again, maybe with Nate Hastings (Sean Dominic). Then later, Nate will suggest to her that they go to see Jared (Michael Maclane). She’ll say sure but at some point, she wants to go out on a real date with him.