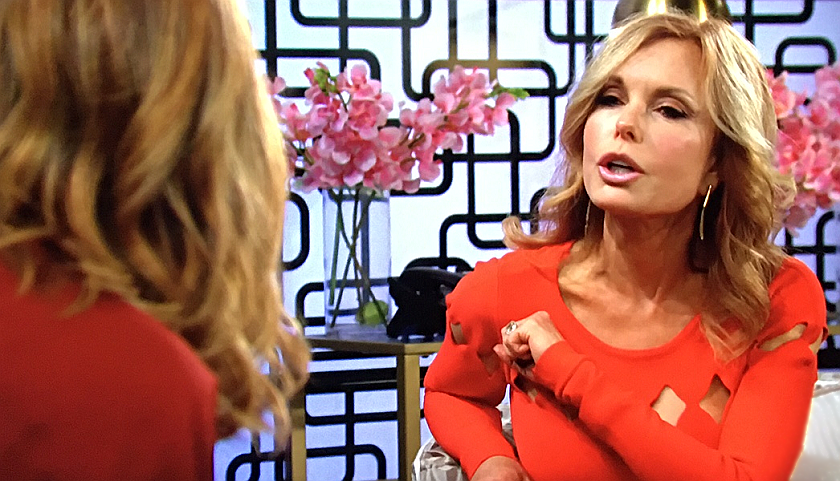 The Young And The Restless (Y&R) scoop for Thursday, April 1 suggests Lauren Fenmore (Tracey E Bregman) will not be impressed by Phyllis Summers’ (Michelle Stafford) suggestion.

Spoilers tease Billy will appeal to Jack to front more money to buy Cyaxares Media. He’ll tell him that Adam Newman (Mark Grossman) has been accused of poisoning Rey Rosales (Jordi Vilasuso), which provides an opportunity to swoop in. Jack will turn him down flat. “You want this for the wrong reasons,” he’ll tell Billy.

At Chance Comm, Lily will get a call from Ashland’s office and when Billy shows up, she’ll ask why he went behind her back. He’ll say it was just a phone call. Then Victoria Newman (Amelia Heinle) will arrive and suggest they team up and make an offer to Ashland as a joint venture. They’ll discuss it alone. Billy wants to go for it but Lily does not. “I really think we need to walk away from this deal.”

Meanwhile, Kyle will get a text from Ashland. “Arriving in Genoa City tomorrow. Let’s have lunch.” Jack will tell Kyle to let him handle it but he’s not so sure. Later, he’ll tell Summer Newman (Hunter King) that he’s a big boy and thinks he should be dealing with Ashland himself.

At the hospital, Sharon and Nick Newman (Joshua Morrow) will tell Faith how happy they are she’s awake. After Nate Hastings (Sean Dominic) tells them she’ll make a full recovery, they’ll step outside the room and Moses will walk in and introduce himself. She’ll wince and he’ll ask her if she’s okay. She’ll say he made her laugh. Is Y&R planning a teen romance for these two?

When Sharon arrives home, Rey will be waiting for her. She’ll say it’s good to see him and ask if the police have located Adam. Rey will say no but he’ll ask his wife if Adam has reached out to her. “No. I haven’t heard a thing,” she’ll lie.

Finally, Phyllis will tell Summer she put in a call to Wyatt Spencer (Darin Brooks) and plans to convince he and his father to forgive Sally Spectra (Courtney Hope) so she can move back to LA. Then she’ll meet with Lauren and suggest she put Sally in charge in Fenmores’ LA division. “Why are you trying to get rid of her?” Lauren will ask. Phyllis will say she doesn’t want Sally to hurt anyone she cares about. “Nothing you have said justifies me running Sally out of town,” Lauren will say.

But will Phyllis manage to force Sally out of Genoa City? It looks like a great episode coming up! Keep reading The Soap Scoop for more Young And The Restless spoilers and news. And make sure you join our free Facebook Group.