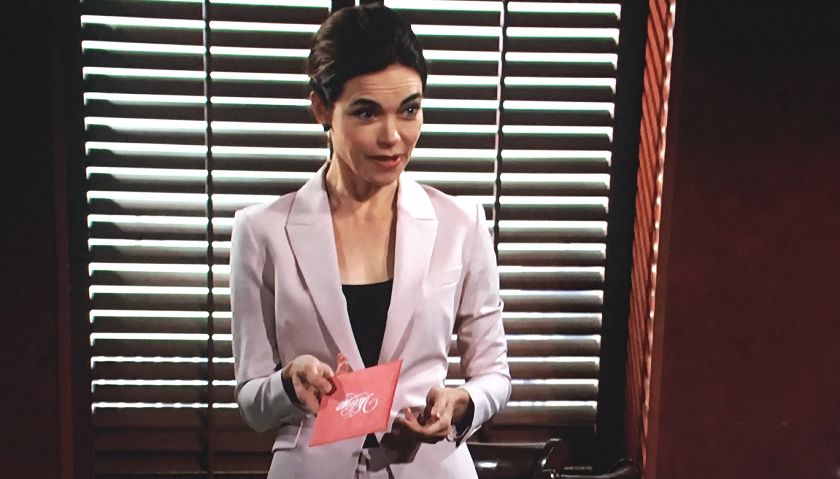 The Young And The Restless (Y&R) scoop for Monday, September 7 suggests Victoria Newman (Amelia Heinle) will finally enjoy an escape.

Also coming up, Lola Rosales (Sasha Calle) will have another temper tantrum, while Theo Vanderway (Tyler Johnson) and Billy Abbott (Jason Thompson) hang out. Plus, Chance Chancellor (Donny Boaz) looks for Adam Newman (Mark Grossman), who will spiral out of control for the hundredth time.

Spoilers tease Lola will invite Theo to visit her at Society. When she leaves the kitchen to go looking for him, she’ll find Summer Newman (Hunter King) instead. “No Theo, huh?” Summer will tease. “Well, that’s rare.” Lola will snap at her and walk away.

Summer will share a meal with Noah Newman (Robert Adamson), who will ask her why she hangs out where Kyle Abbott’s (Michael Mealor) ex-wife works. And Lola will make a special meal for Theo, who tells Billy he has nowhere to go. They’ll hang out and chat about music and baseball.

Lola will realize Theo’s not coming and she will angrily pitch his food into a garbage can. When she walks out of the kitchen, Noah will attempt to introduce himself but Lola will blow him off. He’ll sarcastically ask Summer if Kyle’s ex is always this nice.

Meanwhile, hoping to warn Adam, Chance will head to the penthouse only to find Chelsea Newman (Melissa Claire Egan) there, alone. He will warn her that Alyssa Montalvo (Maria DiDomenico) is in town, asking questions about Las Vegas. Chance can tell Chelsea’s hiding something from him but she’ll deny it.

Meanwhile, Adam is once again on a downward spiral, like he is every other day. He’ll call Sharon and ask her to come to the motel. Once she arrives, Adam will talk about all the terrible things he’s done. He believes walking away from Chelsea may save her from him. Sharon will tell him he’s wrong. She’ll hold his hand and put him to bed like he’s a little boy. Then she’ll get a call from her doctor, asking her to come in for her test results.

Finally, Nikki Newman (Melody Thomas Scott) can tell her daughter is stressed out and overworked. She’ll give her a red envelope and tell Victoria that she needs to visit The Escape Club. After her mother leaves, Victoria will glance at the envelope and smile as she calls Billy and asks him to look after the kids.