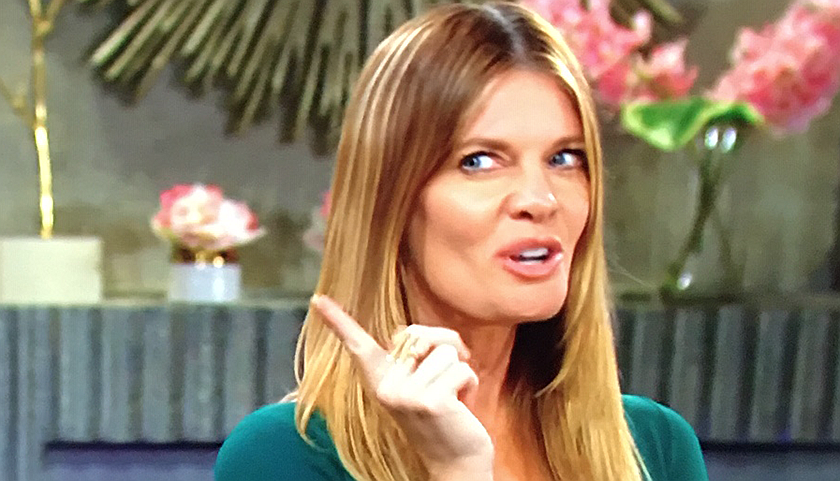 Chelsea Newman (Melissa Claire Egan) will show up at Chloe’s house crying, after yet another argument with Adam. She’ll tell her Adam is pushing her away. Chloe won’t pull any punches – she’ll tell her friend she needs to be rid of him. “The sooner you see Adam for who he really is, the better off you’ll be.”

Of course, she won’t listen to Chloe and she’ll head to Chancellor with a request for Billy Abbott (Jason Thompson). “I’d like to spend some time with Johnny,” Chelsea will say. Billy will be completely stunned.

Meanwhile, Sharon Newman (Sharon Case) will run into Adam at Crimson Lights. She’ll tell him she’s still waiting for the results of her surgery. He’ll talk about the “lifetime of history” they had before he ever met Chelsea.

Adam will say she’ll never love Rey Rosales (Jordi Vilasuso) the way she loves him. “He builds me up and gives me strength,” Sharon will say. “Whereas, with you…things are just complicated.” She wants to focus on her health and her new life with Rey. Then she’ll walk away. When she gets home, she’ll have a proposal for Rey. “I feel like you should ask me to marry you.”

At Society, Mariah, Tessa and Lola will enjoy some beverages. And Tessa will put her foot in her mouth. “Cheers. It sound like the perfect way to deal with the insanity of Kyle’s wedding.” Lola will be shocked by the news and Tessa will apologize. “So, why don’t we just forget the incredibly stupid thing that I said and get girls’ night started?” But Kyle will show up, looking awful, and Lola will immediately admonish him.

What the ladies don’t know is that the elopement never happened. A stunned Phyllis will hear the news from Kyle. He’ll tell her she got what she wanted. Kyle woke up to an empty bed and a goodbye note on their wedding day. “Wow. What did you do to scare her off?” she’ll ask him.

Later, when she’s discussing the doomed elopement with Jack Abbott (Peter Bergman), Phyllis will blame Kyle, noting that he’s already home and she has no idea where her daughter is. “Summer is the one who is devastated. Obviously he did something to scare my daughter away.”