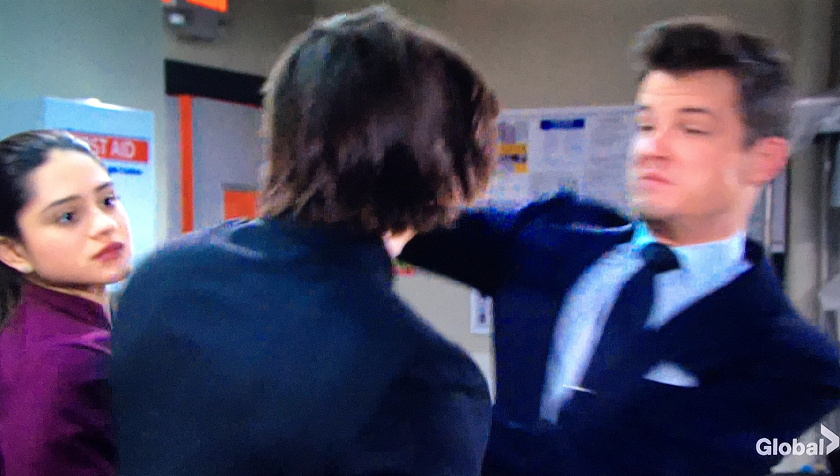 At Society, a Jabot employee party will begin pleasantly enough. Theo will arrive and will begin chatting with Lola Abbott (Sasha Calle). Then Jack Abbott (Peter Bergman) and Kyle will show up and Kyle will not like what he sees.

Summer Newman (Hunter King) is also there and as other guests begin to arrive, Lola will call her into the kitchen. She’ll explain that the power is out and although the generator kicked in, she won’t be able to prepare any food. Summer will panic at first, but Lola says she’ll go get her food truck. Later, everyone is enthused about how good the food was. Theo will heads to the kitchen to thank Lola for putting on a great spread.

“You’re an amazing woman,” Theo tells her, touching her arm, just as Kyle walks through the door. He grabs Theo and hits him, knocking him to the floor. “What the hell is wrong with you?” Lola asks her husband angrily.

After Theo leaves, the pair will get into an argument. Lola will tell Kyle he’ll never understand Theo because he hasn’t had a trust fund to rely on his whole life. Kyle will insist that Theo is manipulating her. He will then angrily storm out of the kitchen.

Meanwhile, Mariah gets a text from Tessa that she can expect a delivery. When she answers the door, her girlfriend is standing there. The pair embrace and Mariah tells her she’s needed her. She doesn’t tell her about Sharon Newman’s (Sharon Case) cancer, as her mother has asked her not to tell anyone. Tessa is only able to stay for a few hours, but Teriah makes the most of it.

At the Grand Phoenix, Phyllis will spy Abby and Chance Chancellor (Donny Boaz) getting on the elevator, heading to his suite. It isn’t long before the fire alarm goes off and Abby has take off to see to the false alarm. Chance and Abby will run into Phyllis in the lobby, who is in her bathrobe. He will tell her he set up the system so if someone pulls the alarm, they’ll get sprayed with blue dye. She will show him her clean arm. But after he leaves, Phyllis will take gloves with blue dye on them out of her bathrobe pocket.

It looks like another great episode is coming up. Keep reading The Soap Scoop for more Young And The Restless spoilers and news. And make sure you click here to join our free Facebook Group.