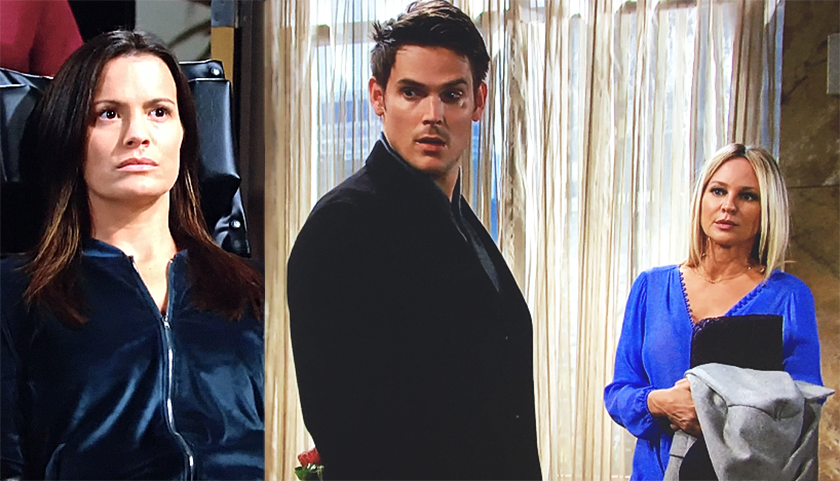 The Young And The Restless (Y&R) scoop for Monday, January 18 suggests Chelsea Newman (Melissa Claire Egan) will be furious when she sees Sharon Newman (Sharon Case) in the penthouse.

Also coming up, Lily Winters (Christel Khalil) has a theory about Victoria Newman (Amelia Heinle) and Adam Newman (Mark Grossman) will thank his father. Plus, Abby Chancellor (Melissa Ordway) and Chance Chancellor (Donny Boaz) will get some terrible news.

Spoilers tease Victoria will show up at Chance Comm. She’ll be there on the pretext that she wanted to give Billy Abbott (Jason Thompson) his tablet, which he’d left at her place. “I just wanted to drop that off,” she’ll say to him in front of Lily. “And let you know the kids and I had a wonderful time last night.”

When she leaves, Lily will make a face. “I think she misses you.” She’ll then mention how coincidental it was that Victoria’s schedule magically cleared up the night before. “Clearly she wanted me to know that you two were together, I could hear it in her voice,” Lily will say. Billy won’t agree, but is Lily right?

At Newman Enterprises, Nikki Newman (Melody Thomas Scott) will tell Victoria she closed a deal but the client wants them both to sign the contract in Hawaii.  After grumbling about how she’s too busy to get away, she’ll tell her mother she’ll think about it.

Meanwhile, after her medical procedure, Abby will find out a fertilized egg can’t attach to her uterus, meaning she’ll never carry a child. Back at home, Chance will try to cheer her up. “Yes this is a setback but it is by no means the end of our dream,” he’ll say. “We will have a family.” Traci Abbott (Beth Maitland) will arrive and she’ll tell Abby she’s loved and that she still has a lot of options.

Finally, Adam will tell Victor that Chelsea is working hard but hasn’t made any progress. He will also say he’s grateful and thank his father for his help. When he returns home, Sharon will arrive with some books about paralysis.

A minute later, Chelsea’s nurse will wheel her into the room. Adam will try to explain to Chelsea that he doesn’t get a lot of visitors. Chelsea’s inside voice will scream: “Leave Sharon – now!” And an uncomfortable Sharon will quickly depart. Will seeing Sharon worsen Chelsea’s condition or make her fight even harder to recover?

This is our #FridayFeeling for @BandB_CBS and #YR’s crossover event! Keep tuning in to see your favorite Daytime Drama stars cross paths. ⭐️ pic.twitter.com/XTqMKGcqDU