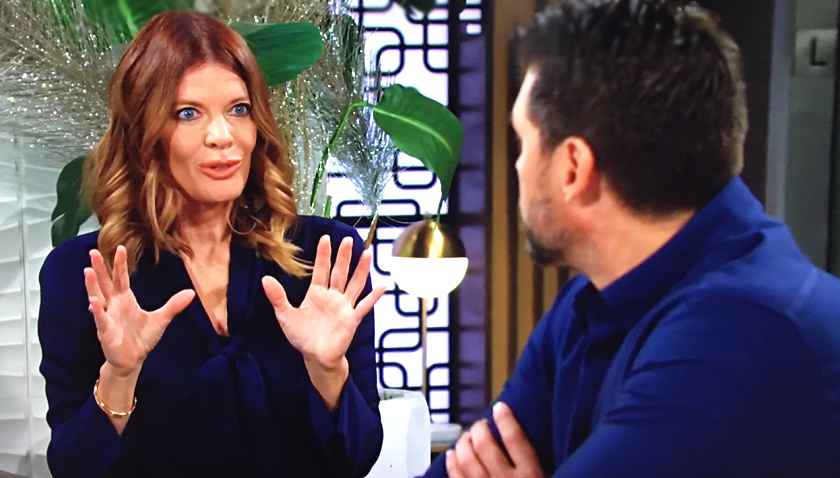 The Young And The Restless (Y&R) scoop for Monday, December 28 suggests Phyllis Summers (Michelle Stafford) will fish for information.

Also coming up, Sharon Newman (Sharon Case) will run into someone unexpected. And Nick Newman (Joshua Morrow) and Victoria Newman (Amelia Heinle) will have a disagreement. Plus, Adam Newman (Mark Grossman) and Chelsea Newman (Melissa Claire Egan) are back in Genoa City.

At Crimson Lights, Sharon, Rey Rosales (Jordi Vilasuso), Mariah Copeland (Camryn Grimes) and Tessa Porter (Cait Fairbanks) will go over a wedding checklist. Sharon will be excited that Tessa is writing a song for them. When Shey leave, a panicked Tessa will tell Mariah she hasn’t even started the song. Will she manage to write something before the wedding?

Meanwhile, Chelsea will be nervous as she and Adam arrive home. She’s having brain surgery in the next few days and hopes it’ll go well. Adam will try to comfort her and then head to Society for some takeout. He’ll run into Billy and tell him he aided and abetted Alyssa Montalvo (Maria DiDomenico) for having her write the article about him. “You never would have gotten arrested if you hadn’t been so obsessed with me.”

As Adam turns to leave, he’ll run smack dab into Sharon. She’ll tell him she signed the papers to have him committed because she was worried about him. “Thank you for still giving a damn, it means a lot,” Adam will say, just as Rey arrives. He’ll thank him for arresting the shooter and then wish them both well.

At The Grand Phoenix, Phyllis and Nick will discuss Victoria, who walks into the hotel at that moment. Phyllis will tell Nick she’s going to ignore her. Nick will sit with his sister and tell her this is the last place he thought she’d be. She’ll say she’s meeting a business associate. “In the hotel you tried to steal from Phyllis?” he’ll add. Victoria will tell him it was just business. “Just because you and Phyllis are in the on again phase of your relationship doesn’t mean I have to make nice with her,” Victoria will say.

Finally, Phyllis will overhear Kevin Fisher (Greg Rikaart) talking on the phone with Michael Baldwin (Christian LeBlanc). He’ll mention Gloria Bardwell (Judith Chapman) and Victoria and Newman Enterprises. She’ll sit down with him and they’ll talk about having moved on.

Kevin will mention her swanky hotel and she’ll tell him Victoria tried to steal it from her. Then she’ll ask him about Gloria. As he begins to divulge what Gloria is up to, Chloe Mitchell (Elizabeth Hendrickson) will walk over and tell him they have to leave. Phyllis will have a curious look on her face as they walk out. Will this be Phyllis’ chance for revenge on Victoria?