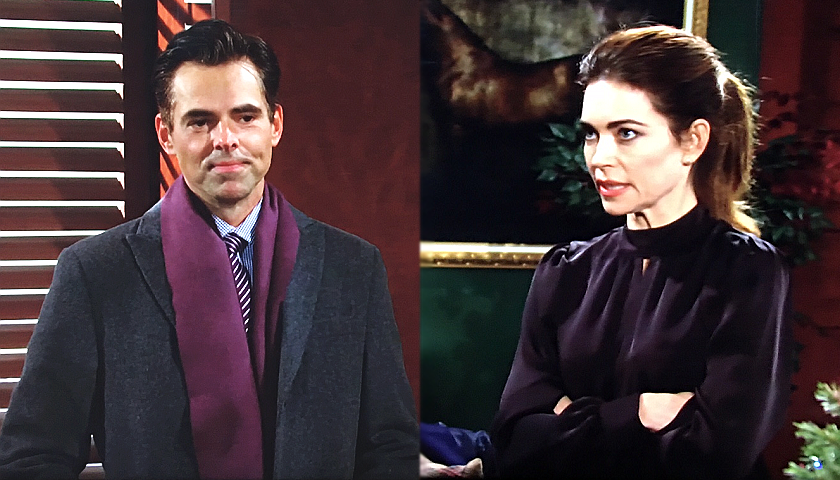 Also coming up, Jack Abbott (Peter Bergman) will think back on past Christmases as he grieves his mother. Plus, Rey Rosales (Jordi Vilasuso) talks family traditions with his sister and Jordan (Madison Thompson) tells Faith Newman (Alyvia Alyn Lind) there’s a way for her to prove she’s cool.

At Crimson Lights, Jack will encourage Sally Spectra (Courtney Hope) to go home for the holidays. When she says she can’t, he’ll invite her to pop by the Abbott mansion on Christmas Eve for eggnog. Will Sally take him up on his offer? At home later, Jack will recall discussing Christmas ornaments with Dina Mergeron (Marla Adams) on a previous Christmas. He’ll get a tear in his eye as he remembers his late mother.

Rey and Sharon Newman (Sharon Case) are busy, getting ready for the holidays and their wedding. “It’s going to be the best New Year’s Eve,” Sharon will gush. She’ll say she loves him and can’t wait to marry him.

At Lola Rosales’ (Sasha Calle) place, she and Rey will discuss their unique family Christmas traditions and how Arturo Rosales (Jason Canela) is coming for the wedding. Rey hopes inviting his brother won’t backfire. Then Lola will ask him if he’s nervous about getting married. “I’m ready, I’m excited,” Rey will reply.

At Society, Jordan will tell Faith if she wants to prove she’s fearless and awesome, she’ll steal a bottle of vodka from behind the bar. Jordan heads to the kitchen to distract Lola and Faith walks behind the bar. She’ll think about stealing a bottle, just as Rey and Sharon are walking into the restaurant. When Jordan comes back out she’ll tell Faith she knew it would be easy. “Don’t be mad at me,” Faith will say. “I couldn’t do it.”

Finally, Billy will be at Victoria’s office with her and Johnny and Katie, talking about their Christmas plans. He’ll tell Victoria about the dream he had while he was in prison and how happy is to be a free man. Then he’ll say he’s going to be out of town for the night. “You’re leaving town this close to the holidays? What’s so important that it can’t wait?” Victoria will ask.

He’ll say it’s personal and she’ll guess that he’s going somewhere with Lily Winters (Christel Khalil). Billy will be amused and will ask her outright if she’s jealous of his romance with Lily. She’ll deny it and tell him she thinks Lily is a good influence on him. But the face she makes when Billy looks away says otherwise. Is Victoria jealous?

It looks like another great episode coming up! Keep reading The Soap Scoop for more Young And The Restless spoilers and news. And make sure you join our free Facebook Group.

Next week on #YR, Billy senses jealousy from Victoria, Jordan pressures Faith to make a bad decision, and Amanda might have found her birth mother! pic.twitter.com/rK8iWWHY2X