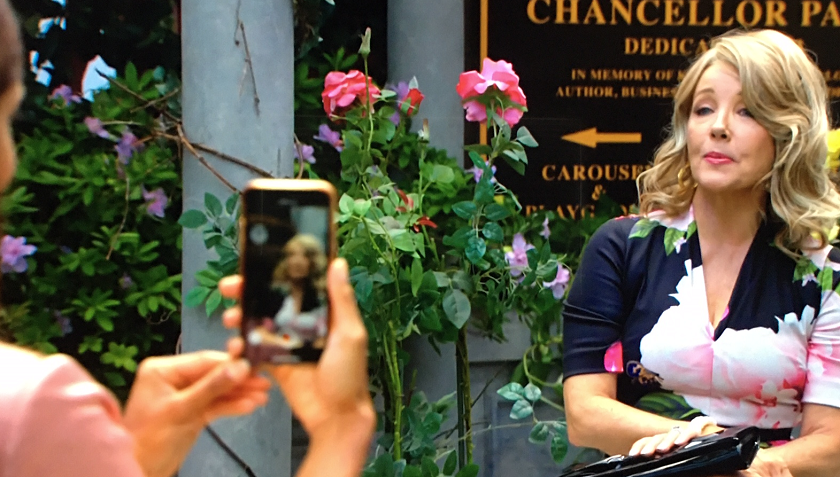 The Young And The Restless (Y&R) scoop for Monday, August 10 suggests Lily Winters (Christel Khalil) will interview Genoa City citizens. And she’ll have the assistance of her partner in crime Billy Abbott (Jason Thompson).

Much like its sister soap the Bold And The Beautiful, Y&R’s first new episode since April will bring viewers up to speed on what happened just before the show went off the air. Monday’s episode will mark the anniversary of Katherine Chancellor’s (the late Jeanne Cooper) dedication at Chancellor Park. And guests there will relive memories of the recent past.

It begins with Lily asking Nikki Newman (Melody Thomas Scott) what Katherine would say about the current state of Genoa City. “I imagine she would feel the same way about the town as she always did, amused, horrified, cautiously optimistic.” Viewers will then see flashbacks of Victoria Newman’s (Amelia Heinle) stabbing.

Next up is Nick Newman (Joshua Morrow), who will discuss Sharon Newman (Sharon Case) being diagnosed with breast cancer. Mariah Copeland (Camryn Grimes) will recall how the rest of the family has helped Sharon get through it.

Then there’s Victoria, who will talk to Lily about her ascension to the Newman throne. She’ll also mention the latest Newman family drama involving her half brother Adam Newman (Mark Grossman).

Billy will run into Victor at the park. The Newman partriach will predictably tell him to: “Heed my warning, Billy boy.” Billy will also get into an argument with Adam. As Adam walks away, he’ll recall his proposal to Chelsea Newman (Melissa Claire Egan).

Finally, Jack Abbott (Peter Bergman) will talk about his mother’s struggles with dementia. Although he and his sisters have been heartbroken watching her slip away, they’ve also never been closer. Keep reading The Soap Scoop for more Young And The Restless spoilers and news. And make sure you join our free Facebook Group.