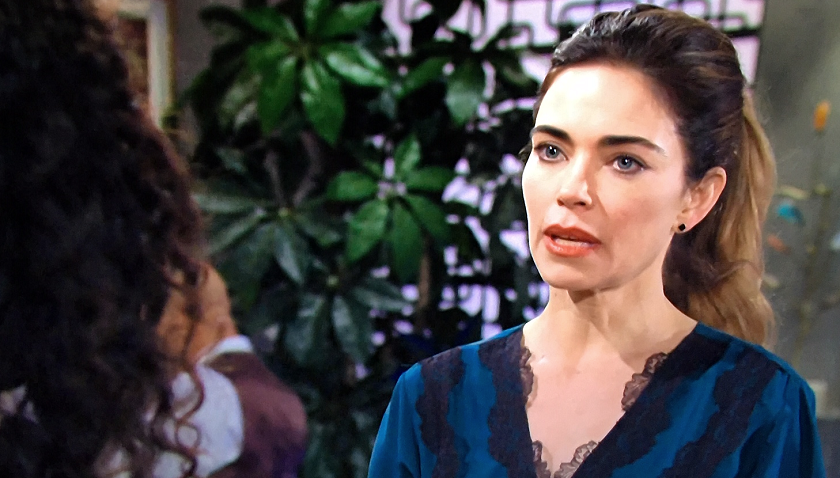 The Young And The Restless (B&B) scoop for Monday, April 13 suggests Victoria Newman (Amelia Heinle) will try to turn Adam Newman’s (Mark Grossman) ally against him.

At Society, Amanda and Nate will enjoy each others company. A humorous moment will occur when Billy Abbott (Jason Thompson) walks in. He’ll spot them together and turn right around and walk out of the restaurant. Nate and Amanda will have a pleasant chat, discussing their childhoods and their ambitions and then they’ll share a sweet kiss.

At the Grand Phoenix, Victoria will introduce herself to Alyssa Montalvo (Maria DiDomenico) and give her fair warning about Adam. “Whatever he’s told you is a lie,” Victoria will say. “Adam has no intention of getting your story published because he doesn’t want the truth to come out.” Then she’ll tell her that Adam used her exposé to blackmail Victor for the CEO chair at Newman Enterprises. Alyssa will be angry, but Victoria will ask her to keep it under wraps for now.

Young And The Restless Daily Scoop Thursday, April 9: Sharon Gets Good News – Phyllis And Abby Have It Out #YR #YoungandRestless #YoungandtheRestless #Teriahhttps://t.co/qWGOgJcz3W

Upstairs, Nick will question Phyllis in her suite about their commitment to one another. Phyllis will laugh and tell him that sex always gets in their way. She’s proven right when they end up taking a shower together. Phick will then have a serious discussion about where their relationship is headed. “I really like being the guy you feel like you can be yourself with,” Nick will tell her. They will agree to trust each other and Nick will say he’s all in.

Other spoilers tease Billy and Lily Winters (Christel Khalil) will talk about the job they offered Traci Abbott (Beth Maitland) at Chancellor’s fiction division. As he practices putting, Lily will then ask him if he’s dropped by her office because he’s bored.

Finally, Adam and Victor are at Newman Enterprises. Adam wants to celebrate his new position but Victor wants to get down to business. “I know how to do this job,” Adam will say. “I’ve done it before – it’s not rocket science.” Victor will hand Adam some deals that he needs to take care of and tell him he destroys things and will destroy his chances at Newman too. But all Adam seems interested in is glory and he’ll ask his father how he’ll announce to the world that he’s the new CEO.

Victor will tell his son he hasn’t considered everything properly and may regret his actions, but Adam will say he’s just holding Victor accountable for his. As Victor prepares to leave, he’ll smile smugly and tell Adam to enjoy his time in the CEO chair.