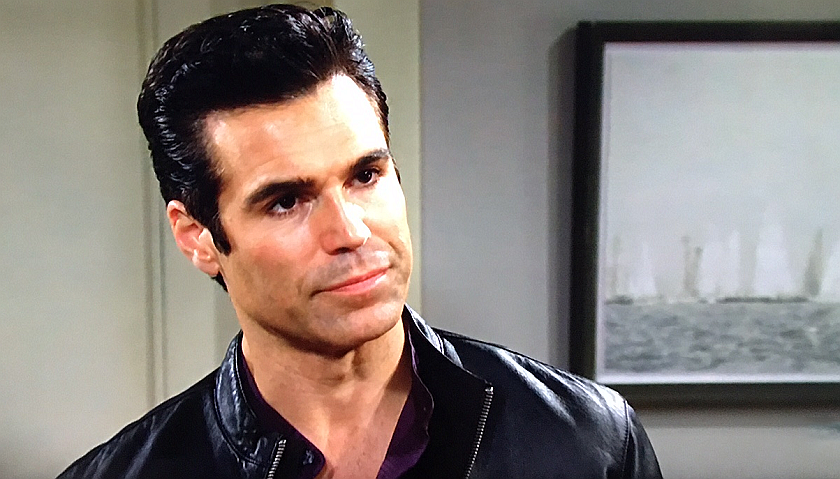 Spoilers tease Amanda will approach Victor Newman (Eric Braeden) at Society. She’ll tell him she’s representing Sutton Ames (Jack Landron) in the death of former Newman employee Richard Nealon. He’ll warn her to stay away from Newman and him but she’ll say she requested files on all Newman employees from 30 years ago. The files will be waiting for her in her hotel room and she’ll grab her father’s. Amanda will hold Richard’s picture in her hands as tears form in her eyes.

At the penthouse, Nick is encouraged that Chelsea can talk and he’ll call Nate, who will arrive shortly afterwards. Nick will say he has to leave to pick up his daughter. Nate will tell her she needs time to recuperate but Chelsea will say she needs to see Detective Rosales.

Speaking of the detective, Sharon will tell him her theory that Chelsea set Adam up. “Let’s forget the physical impossibility of your theory,” Rey will say. “What’s her motive?” Sharon will say that she is. “I think your feelings for Adam are clouding your judgement,” Rey will reply. Then she’ll tell him where Adam is hiding out and he’ll head out.

Meanwhile, Faith Newman (Reylynn Caster in her Y&R debut) will be released from hospital. She’ll also meet her advocate Christine Williams (Lauralee Bell). She’ll be standing by her side in court and advocating on her behalf. Faith will tell her parents she’s nervous about her court date but will be glad to have Christine with her.

When their daughter goes for a nap, Nick will tell Sharon that Chelsea spoke. She’ll say she’s not surprised because Chelsea was the person who set Adam up to take the fall for Rey’s poisoning. He won’t believe her and will head over to the lake house to meet Rey.