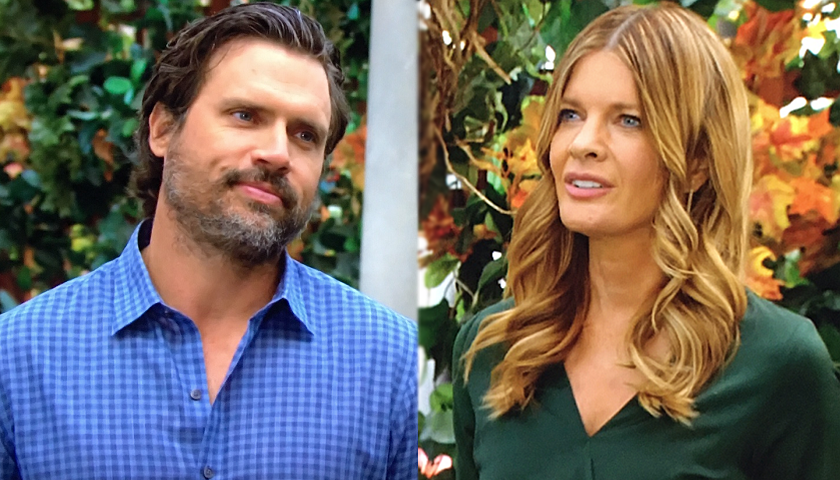 The Young And The Restless (Y&R) scoop for Friday, September 18 reveals Sharon Newman (Sharon Case) will ask Victoria Newman (Amelia Heinle) what she’s up to.

Having been caught (almost) red-handed in Billy’s office, Chelsea will explain that she’s trying to pick Theo Vanderway’s (Tyler Johnson) brain about a new fashion business venture. Billy will be suspicious but will believe her when Theo shows up. Billy will be agitated as Chelsea makes a quick exit and Theo will ask if he was wrong to bring her there. “No, it’s fine,” Billy will say.

Theo will exit as Alyssa Montalvo (Maria DiDomenico) arrives and Chelsea will be stunned as she listens in on their conversation, thanks to the bug she planted on Billy’s lamp. “Expose Adam,” he’ll tell Alyssa. “Expose everything he’s done. We are gonna take that filth and we are gonna shine a big, bright light on it for the world to see.”

Young And The Restless Poll: Who Should Adam Be With – Chelsea Or Sharon? Click on the link to vote! #YR #YoungandRestless #YoungandtheRestless #Chadam #Shadam https://t.co/ONtzktsH0j pic.twitter.com/MmaTKKg65F

Then Chelsea will pick up Adam’s phone and read a text from Sharon: “I know you think we crossed a line — but I needed that as much as you did.” Chelsea will be livid as she realizes that everything makes sense. She had heard someone inside the motel room before he arrived. Adam will explain everything to Chelsea and she’ll seem to believe him.

At Chancellor Park, Nick and Phyllis will talk about their past and how their relationship feels different this time. “Famous last words, right?” Phyllis will say, as Nick grins. She’ll tell him she’s proud he’s no longer under his father’s shadow and running his own business. “I’m very happy with where things are right now,” Nick will say. “That’s what I’m focusing on.”

Young And The Restless Scoop – “You Stay The Hell Away From My Fiancé!”

Finally, just after Sharon sends Adam the text, Victoria will come to her door. The Newman CEO will say she just wanted to see how Sharon is doing. But Sharon will begin to question Victoria’s intentions when she starts asking her about Adam’s treatment. “Is that why you’re really here?” Sharon will say. “Because you’re hoping that I will tell you whatever it is you think that Adam is up to next?”

Later, Sharon will be in for a surprise. She’ll open her door, likely expecting Adam to be there, but it’s Chelsea. “You stay the hell away from my fiancé,” Chelsea will shout. “Understood?”