The Young And The Restless (Y&R) scoop for Friday, September 10 suggests Ashland Locke (Richard Burgi) will receive a disturbing message.

Y&R spoilers tease Sharon will drop by Newman Media to apologize to Adam. “You needed my help and I wasn’t there for you,” she’ll say. “But I am now.” Then she’ll advise him that he and Chelsea Newman (Melissa Claire Egan) need to talk to their son together. Sally Spectra (Courtney Hope) will eavesdrop and then interrupt them. But when Sharon leaves, she’ll say she’s sorry. “No you’re not,” Adam will reply. “I saw you outside the door listening. I don’t find that behavior the least bit amusing.”

Meanwhile, Billy will continue to be like a dog with a bone, when it comes to Ashland. He’ll tell Lily Winters (Christel Khalil) he thinks the media mogul’s history has been scrubbed. There are no death certificates for his parents and no birth certificate for Ashland. “It’s as if he and his family never existed.” 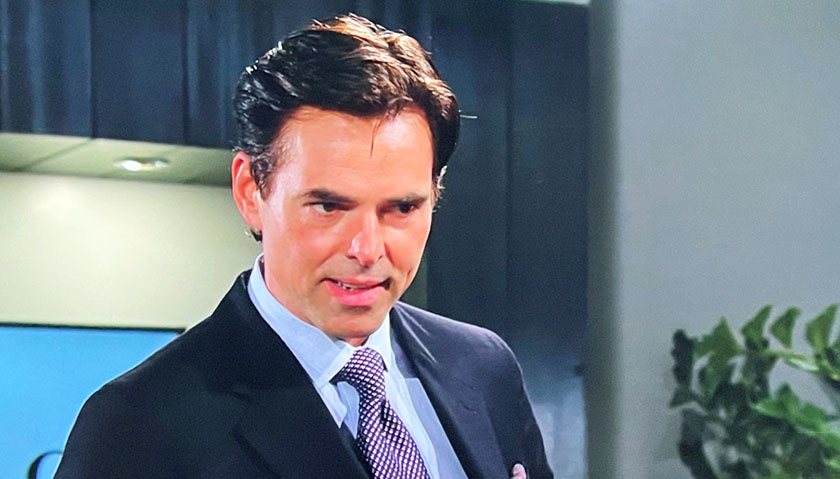 At Crimson Lights, Nate Hastings (Sean Dominic) and Elena Dawson (Brytni Sarpi) will discuss Ashland’s best man request. “It still doesn’t make sense to me,” he’ll say. “I’ve only had a handful of encounters with him. It seems kind of weird.” But Elena will say maybe he wanted to choose someone who has a history with Victoria’s family.

Lily and Billy will arrive and they’ll find out Nate and Ashland have become friends and he and Elena have been invited to the wedding. Billy will find it all suspicious. “Nate and Ashland becoming best friends doesn’t raise a red flag for you?” he’ll ask Lily, who thinks he’s exaggerating. “All of a sudden he’s Mister Charming to people he barely knows.”

At home, Ashland will receive an ominous text. “You’re a hard man to keep track of.” But who is from and what does it mean? It looks like a great episode coming up! Keep reading The Soap Scoop for more Young And The Restless spoilers and news. And make sure you join our free Facebook Group.