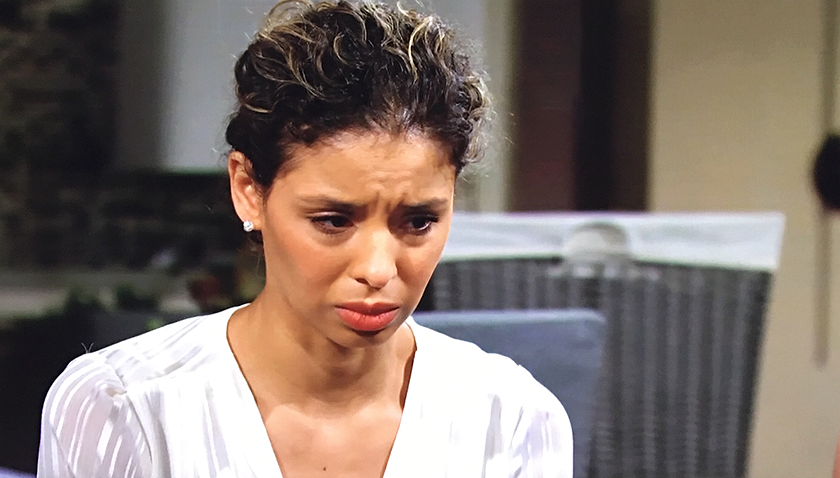 The Young And The Restless (Y&R) scoop for Friday, October 9 suggests Elena Dawson (Brytni Sarpi) will struggle with a painful decision.

Also, Victor Newman (Eric Braeden) will try to make peace with his daughter and Lily Winters (Christel Khalil) receives an interesting offer. Plus, Nick Newman (Joshua Morrow) will give Nate Hastings (Sean Dominic) something to think about.

Spoilers tease Victor will make Lily an offer. He’ll tell her he’s coming after Chancellor. But if she wants to protect the company and her job, all she has to do is “show Billy the door.” Victor will say he will not let “Billy Boy Abbott” use Newman Media to attack his family. Lily will counter, saying it’s no longer Newman Media, his daughter sold the division.

Speaking of whom, Victoria Newman (Amelia Heinle) will ask Nick how Faith Newman (Alyvia Alyn Lind) is doing. “The world just found out she was switched at birth,” Nick will holler at his sister. “How do you think she’s doing?” A stunned Victoria will say she’s sorry.

When he questions her about what she’s doing to Phyllis Summers (Michelle Stafford), she’ll say she can’t believe Phyllis put up 75 per cent of her hotel as collateral. Victoria will say it’s the move of someone desperate and what she did was just business. “It’s almost like I’m listening to dad right now,” he’ll reply.

Later, she’ll have to deal with her father. He’s angry about what she’s done but she is his daughter and he’s hoping they can at least come to some sort of understanding. But she doesn’t seem interested. “Why the hell are you being so difficult?” he will ask her.

At Crimson Lights, Nate will talk about how tough it must be for Nick to have someone in his family who is as damaged as Adam Newman (Mark Grossman). Especially someone who kidnapped his daughter. “You know, some betrayals are beyond the pale,” Nick will reply. “You lose the right to call yourself family.”

Finally, Elena is feeling incredibly guilty about sleeping with Nate. Devon Hamilton (Bryton James) knows something is up and will ask her if she’s okay. She’ll say even though she’s all right with him hanging out with Amanda Sinclair (Mishael Morgan) it still makes her feel a bit insecure. Then she’ll get a text from Nate asking how she’s doing. She’ll say it isn’t fair to Devon and she can’t keep doing this. “I get it,” Nate will respond. “But don’t do anything until we talk.”