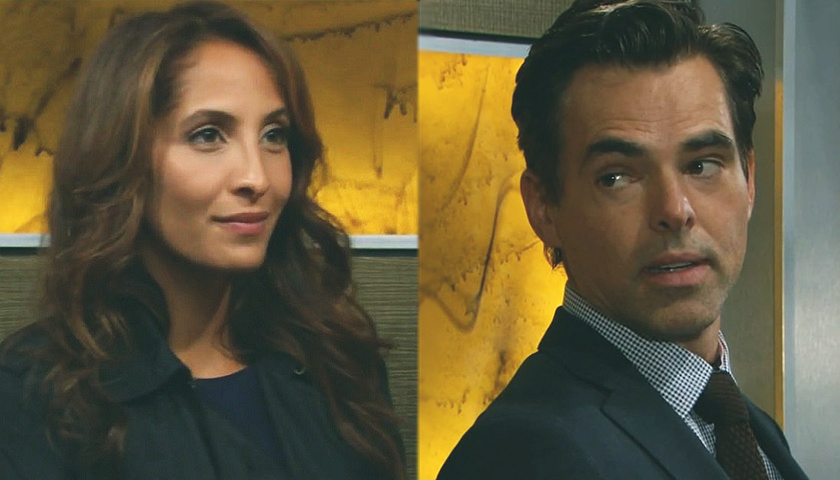 The Young And The Restless (Y&R) scoop for Friday, October 30 suggests Elena Dawson (Brytni Sarpi) will refuse to give up.

Spoilers tease Adam will approach Billy at Chancellor Communications and suggest a truce. “I want to put the bad blood in the past and I want to leave it there where it belongs,” Adam will say. But Billy isn’t buying it. “You want me to forgive you?”

Then Adam will tell Billy that he’s going to court to change his name to Adam Wilson so he will no longer have any association with the family that destroyed him. He’ll then tell a stunned Billy that it’s on the record and he can feel free to print it.

Meanwhile, Chelsea will tell Chloe her results will be back shortly. She scared her friend when she fainted at Crimson Lights. Then she’ll invite her to stay over. “I don’t mean just, like staying here for the night,” Chloe will say. “I think you should just move in.” Kevin Fisher (Greg Rikaart) will also like the idea. Will Chelsea say yes?

At Crimson Lights, Nate Hastings (Sean Dominic) will tell Elena he’s glad she’s okay. She’ll apologize for not answering any of his texts. Nate will then say it was unfair of him to burden her with how he really feels. He knows she’s still in love with Devon Hamilton (Bryton James). Then Lily Winters (Christel Khalil) will blast him for sleeping with Devon’s girlfriend, as though she’d never cheated on Cane Ashby (Daniel Goddard). “The Nate I know would never sleep with his cousin’s girlfriend,” she’ll say. “And in one night, one night, you shatter our family.”

After having dinner together at Society, Billy and Lily will get into the elevator at the Grand Phoenix. He’ll talk about the sudden impulse he recently had to kiss her. “And I said we shouldn’t,” Lily will reply. “Well I’m not walking away now, am I?” Then she’ll walk over to him as the elevator doors close.

Finally, Elena will plead her case to Devon. She still loves him and wants his forgiveness. She’ll tell him he gave her someone to love and fight for and it meant everything. “So why’d you throw it all away then?” he’ll ask her. Will Devon ever forgive Elena?