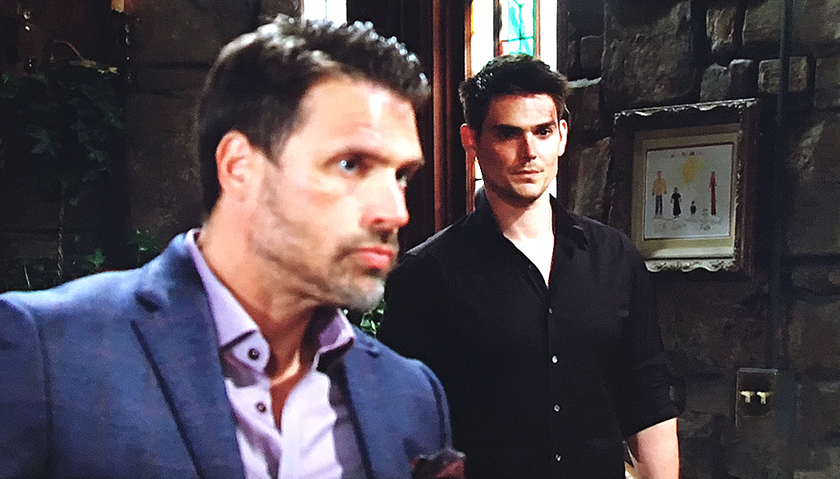 Spoilers tease Billy will find a note from Lily on her desk. She’s set up a romantic treasure hunt for him. “Let the games begin,” he’ll say as he follows her clues. They’ll eventually lead him to Society, where Lily is waiting for him. She’ll say they have the place to themselves. After a dance and some champagne, Billy will suggest they get a place together. “I think that’s the best idea you ever had,” Lily will reply.

At the ranch, Nick Newman (Joshua Morrow) will tell Nikki Newman (Melody Thomas Scott) and Victor Newman (Eric Braeden) about what happened in Kansas. He’ll say he appealed to Adam as a father and promised he wouldn’t be arrested at the hospital. When Nate arrives at the ranch, they’ll tell him the potential donor is Adam. But Nate will tell them it’s cool. “I’m a doctor, not an officer of the law.” Nick will comment that Nate’s career and Faith’s life are “in the hands of my wild card of a brother.”

Meanwhile, Chelsea will panic as she and Chloe Mitchell (Elizabeth Hendrickson) try to figure out Victor’s next move. Chloe will tell her she can’t possibly consider confessing. Then she’ll suggest Chelsea run away with Connor Newman (Judah Mackey). “Who am I kidding?” Chelsea will say. “Do I really think I can outrun Victor?”

Finally, when Adam shows up at her door, Sharon Newman (Sharon Case) will thank him for helping her little girl. “I’m not just doing it for her, I’m also doing it for you,” Adam will reply. He’ll tell her when he was trapped with Nick he realized she was a part of him and always will be. “Even when I had forgotten who I was…you see me in a way no one’s been able to do. Not even Chelsea.”

Later, Nick will arrive and Sharon will tell him Adam is in the shower. She’ll leave and there will be a knock on the door. Nick will say come in and loudly say hello to Rey when he sees the cop walk in. Rey will say he can’t imagine Nick came back without Adam, as the fugitive eavesdrops from the top of the stairs.

He’ll tell Nick he has no intention of standing in the way of Faith’s kidney transplant. “But after the surgery, don’t even consider helping Adam escape,” he’ll say. “It’s considered aiding and abetting.” Once Adam hears this, he’ll walk down the stairs and come face to face with Rey. But will Rey keep his promise or will he arrest Adam on the spot?

It  looks like a great episode is coming up! Keep reading The Soap Scoop for more Young And The Restless spoilers and news. And make sure you join our free Facebook Group.

Today on #YR, Victor calls Chelsea's bluff and Adam makes a dangerous decision. Watch the latest The Young and the Restless episodes for free on @CBS or subscribe for more on @paramountplus: https://t.co/PhtTNsIwWb pic.twitter.com/j3H8rFPkE3