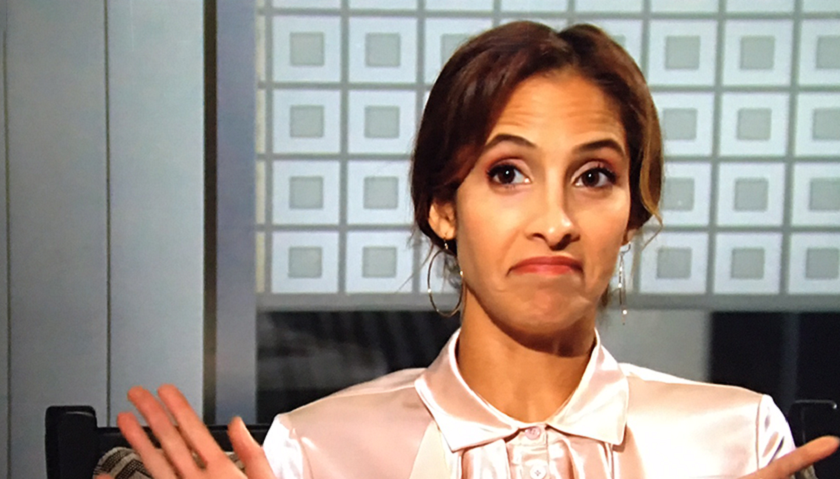 The Young And The Restless (Y&R) scoop for Friday, March 5 suggests Lily Winters (Christel Khalil) will try to clear the air with Victoria Newman (Amelia Heinle).

Also coming up, Chelsea Newman (Melissa Claire Egan) will stand on her own and Victor Newman (Eric Braeden) will have some bad news. Plus, Billy Abbott (Jason Thompson) will ask Jill Abbott (Jess Walton) for money and Kyle Abbott (Michael Mealor) will chicken out.

Spoilers tease Jack Abbott (Peter Bergman) and Sally Spectra (Courtney Hope) will agree not to label their relationship. He’ll tell her he wants to know what makes her tick. “I would love to run my own fashion house again one day.” Sally also knows there are a lot of people who would like to see her fail. “Well they’re wrong, to hell with them,” Jack will say.

She’ll tell him she’s learned some painful lessons but she’s finally on the road to making her dreams come true. She feels as though everything she’s gone through has led her to this moment with him. Then Kyle will walk in the front door and look dumbfounded.

Young And The Restless Daily Scoop Thursday, March 4: Jack Has Sally Over For Dinner – Summer Stands By Her Man – Elena Can't Get Devon Out Of Her Head #YR #YoungandRestless #YoungandtheRestless #Skyle #Elevon https://t.co/Miee4opRDn

Jack will ask what he’s doing there. Sally will take her leave and Jack will tell him whatever he has to say, it better be good. “What exactly did I interrupt?” Kyle will ask. He’ll tell his son it’s none of his business. Kyle will decide not to tell Jack what he’s come there to say. “The bottom line is, there’s nothing to discuss.” Jack will look confused after he leaves.

At the same time, Billy will tell Lily they “need to convince Locke that Chance Comm is the right company for his media division.”  Then he’ll video call Jill and tell her he wants to outbid Victor.  Jill will tell him she’ll help out as long as Lily’s on board.

At Crimson Lights, Victor will meet with Adam, who will tell him he’s intrigued by his offer. But the two of them working together again seems strange. “Are we really going to be able to bury the past?” Adam will say. Back at the penthouse, Chelsea will manage to lift herself out of her wheelchair and will stand on her own.

Finally, Victoria will show up at Chance Comm, looking for Billy. Lily will tell her he’s not there but she’ll ask her to stick around. Victoria will look uncomfortable as Lily chats about how good she and Billy are together. “I’m sure you have a wonderful business relationship,” Victoria will comment.

“Oh it’s a wonderful relationship all around, that’s what you meant, right?” Lily will respond. Victoria will warn her that she shouldn’t expect it to last, considering Billy’s track record. “I learned my lesson the hard way and you’re about to learn the same lesson.”

When she’s back at Newman, a perturbed Victoria will call Ashland herself. She’ll say she realizes he has several offers on the table but she’s prepared to beat them all. How is Victor going to react when he finds out?

2 Thoughts to “Young And The Restless Daily Scoop Friday, March 5: Lily Tries To Clear The Air With Victoria – Adam Intrigued By Victor’s Offer – Kyle Chickens Out”