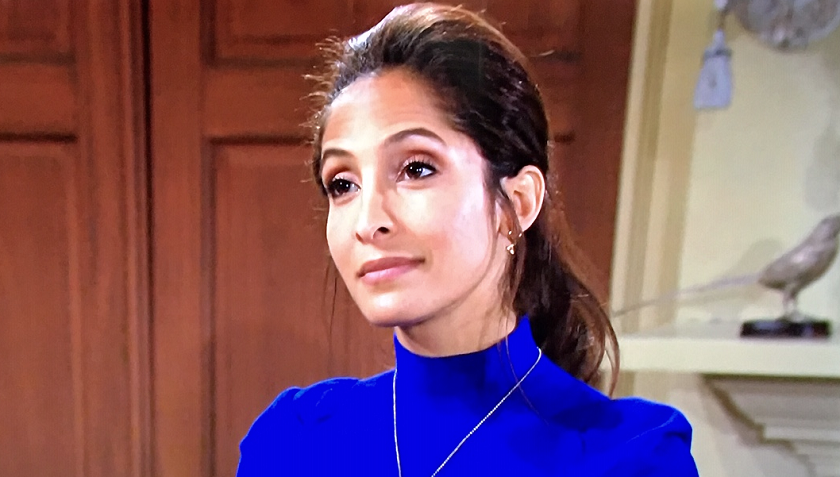 Nate Hastings (Sean Dominic) did advise Nikki that Victoria may be suffering from PTSD and Nikki will continue to fret about it. She’ll talk to Nick Newman (Joshua Morrow), who feels the same way. They know Victoria seems to be healing physically, but her emotional state isn’t faring half as well.

So Nikki will ask Sharon Newman (Sharon Case) if she would be willing to counsel her daughter. Nikki figures it will kill two birds with one stone. It will give Sharon, who has been worrying about her health since her cancer diagnosis, a purpose and it could really help her daughter get through her current crisis. Sharon will tell Nikki that she will think about it.

At the Grand Phoenix, Phyllis is at the door to Chance’s suite, threatening to use her key to get into his room. Abby Newman (Melissa Ordway), still wearing her Phyllis get-up, will hide. Phyllis will lay into Chance for breaking into her room. “You violated my personal space,” she’ll tell him. Chance will tell her she violated he and Adam Newman (Mark Grossman) by recording them. Later, a triumphant Abby and Chance will return to the hotel, after getting into Phyllis’ safety deposit box.

At Crimson Lights, Nate Hastings (Sean Dominic) will meet up with Amanda Sinclair (Mishael Morgan) and Jared (Michael Maclane), whose grandfather has just died. Nate will surprise Jared by offering him a place to live. He’ll protest, as he doesn’t want to go back to a life of living with a stranger. Amanda will take Nate aside and tell him they may be scaring Jared and should take things slow with him. When they return to the table, Jared will be gone.

Meanwhile, Billy will ask Jill Abbott (Jess Walton) why she’s chosen Lily to help him run the new Chancellor division. Jill will tell him they will both run the company together or the deal is off the table. “Either both of you are in or neither one of you is.”

Lily wants the job, although she has some misgivings and hasn’t agreed to anything yet. Billy will text Jack Abbott (Peter Bergman), saying he wants his advice. And Traci Abbott (Beth Maitland) will get a message from Lily, asking to meet.

After some sage wisdom from Traci and Jack, who will both encourage the pair, Billy and Lily will head back to the Chancellor Estate and inform an excited Jill that they’ve decided to work together. It looks like a great episode is coming up. Keep reading The Soap Scoop for more Young And The Restless spoilers and news. And make sure you join our free Facebook Group.