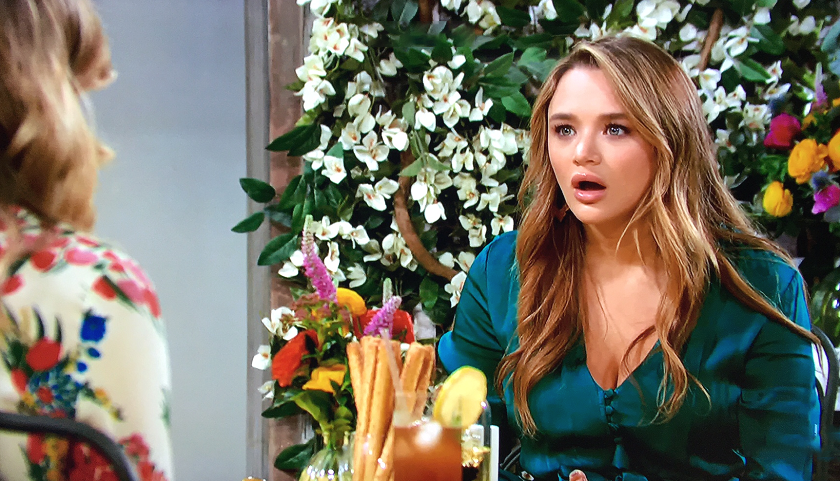 The Young And The Restless (Y&R) scoop for Friday, January 22 suggests Summer Newman (Hunter King) will be shocked by what she hears about Sally Spectra (Courtney Hope).

Spoilers tease Dr. Cavett (Dana Sparks) will tell Adam that Chelsea hasn’t really improved but he should keep encouraging her. “Don’t lose hope, we’re gonna get through this,” Adam will tell Chelsea. But then later he’ll meet with the doctor alone and she’ll tell him she thinks Chelsea needs a therapist for her mental well-being.

Meanwhile, Sharon Rosales (Sharon Case) will get a bouquet of flowers and she’ll ask Rey Rosales (Jordi Vilasuo) who they’re from. “Adam,” he will answer bluntly. She’ll explain she went over to Adam’s place with some books. He’ll tell her he’ll never trust Adam but he does trust her.

Young And The Restless Daily Scoop Thursday, January 21: Abby Comes To A Decision – Jack And Traci Have A Heart To Heart #YR #YoungandRestless #YoungandtheRestless #Chabbs https://t.co/1IhoJT2IK9

At Crimson Lights, Chloe Mitchell (Elizabeth Hendrickson) will ask Kevin if he’s heard from his mother lately. Chloe will leave and he’ll get a text from Gloria: “The patio.” He’ll find Gloria sitting there. She’ll say that because he deleted the thumb drive, she lost her job and is now homeless. “Thanks to you I had to leave Los Angeles,” Gloria will tell him. “I’m moving in with you and Chloe.”

At Society, Sally will run across Jack Abbott (Peter Bergman). She’ll tell him she’s nervous about her marketing pitch. She wants to run it by him before pitching to Lauren Fenmore (Tracy E Bregman). He’ll be impressed and Lauren will love it too. “Coming here from California was one of the best things I’ve ever done,” Sally will say. “Maybe I’ve finally found a home.”

In LA, Summer will meet with the Bold And The Beautiful’s (B&B) Flo Fulton (Katrina Bowden). She’s looking for dirt on Sally and Flo will give her an earful. “I think that warning you about her is the least I can do,” Flo will say. She’ll tell Summer that Sally is good at duping innocent men. “She will stop at nothing to get what she wants,” Flo will inform her. “Think kidnapping, lying, trying to get pregnant to get a man to love her again.”

Summer’s mouth will hang open as Flo goes on to tell her Sally pretended to be dying to hold onto B&B’s Wyatt Spencer (Darin Brooks). “We all believed her and I encouraged her to move in with Wyatt,” she’ll say. “I’m just lucky I was able to figure out her plan.” Summer will thank her and take a photo of the two of them to post on social media. How will Sally react when she sees it?

Traci makes a confession to Jack today on #YR. pic.twitter.com/xjvcTgp0yy