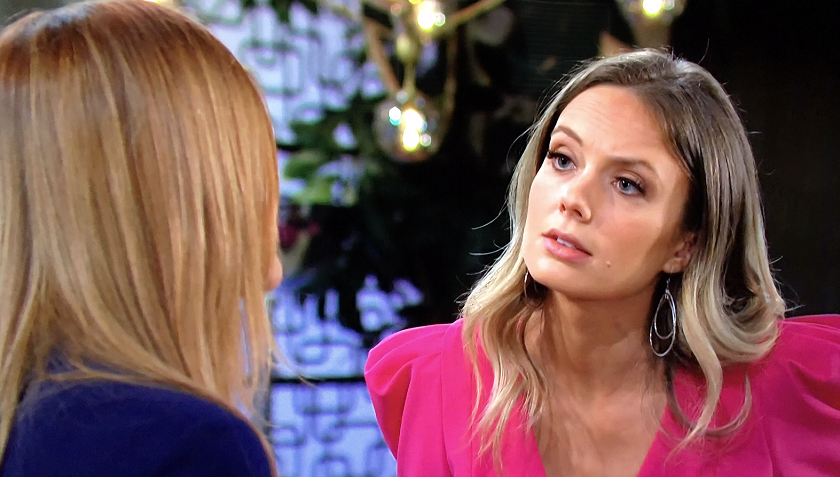 Young And The Restless (Y&R) spoilers for Friday, February 28 suggest that Victoria Newman (Amelia Heinle) will want answers. She’s just woken up in the hospital and doesn’t remember much about how she got there.

Also coming up, Jack Abbott (Peter Bergman) will be the bearer of bad news and Abby Newman (Melissa Ordway) signs her Grand Phoenix shares over to Phyllis Summers (Michelle Stafford).

From her hospital bed, Victoria will ask her father Victor Newman (Eric Braeden) who hurt her. “I remember being at the party and arguing with Billy, but I can’t remember what happened after that.”  Victor will tell her they can discuss that later, for now she needs to rest. Then he’ll tell Nick Newman (Joshua Morrow) and Nikki Newman (Melody Thomas Scott) that he didn’t divulge what happened to Victoria “especially since that psychopath is still on the loose.”

Victor will tell Nick he wants to discuss Newman Enterprises with him and he’ll let him know Adam Newman (Mark Grossman) has offered to help. When Nick protests, Victor tells him he can hire whoever he wants. Furious, Nick will storm out of the hospital.

Young And The Restless And Bold And The Beautiful Stars Pay Tribute To #LeePhillipBell #YR #YoungandRestless #YoungandtheRestless #BoldandBeautiful #BoldandtheBeautiful #CBSSoapshttps://t.co/zt1Du3xscc

At the Grand Phoenix, Jack will stop by to see Abby with some bad news. “It’s Dinah, your grandmother’s not doing well,” he’ll tell her. She’ll ask if he’s told her mother, Ashley Abbott (Eileen Davidson) yet. He’ll say he hasn’t. “My mom and Dinah have had their issues, but there is a fierce love there,” Abby will say. Later, Jack will phone Ashley and tell her she needs to come home as soon as possible.

Later, Abby will get into it with Phyllis, who is still after her hotel shares. Phyllis will hand her an offer and Abby will scoff. But then, she’ll inadvertently divulge to her nemesis that there are now two lawsuits against the Grand Phoenix. “I didn’t have to lift a finger,” Phyllis will say. “It seems like the universe is doing that for me.”

Abby then phones her lawyer and fires him. Amanda is there and will overhear the conversation. She’ll tell Amanda she’s proud of the hotel and she’s not going to let Phyllis beat her and take it from her. Amanda will comment that Abby needs to figure out what winning means to her.

After Abby leaves, Amanda will ask Phyllis if all the hassle over the hotel is worth it. “Absolutely it is,” she will reply. Then Abby will return and thank Amanda for her counsel. She’ll hand Phyllis the paperwork and tell her the Grand Phoenix is hers. Abby bought the hotel across the street and plans to crush Phyllis. “Bring it,” Phyllis will say.