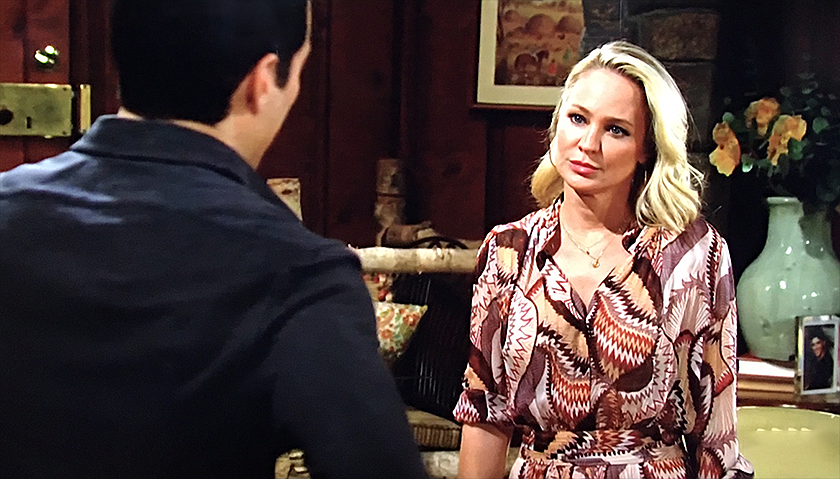 Spoilers tease Chloe will arrive at Adam Newman’s (Mark Grossman) door. He’ll tell her the nurse is getting Chelsea ready for bed. Chloe will look around his shoulder, see that Chelsea’s awake and force her way into the penthouse. As soon as Adam leaves them alone, Chelsea will start crying.

“I just wish I knew what was going on in your head,” Chloe will say. Chelsea will move her hand and communicate to Chloe that she doesn’t want Adam to know. Through questions and Chelsea’s blinking for yes or no, Chloe will determine something is wrong. After she leaves, she’ll text Kevin Fisher (Greg Rikaart) to tell him Chelsea needs their help.

At the Grand Phoenix, Phyllis Summers (Michelle Stafford) will once again tell Sally that no suites are available. Jack will show up. He’s taking Sally to pick up her new car. Phyllis will make a face as they leave.

After they pick up her car, Sally and Jack will have a coffee at Crimson Lights. She wants to thank him and he’ll tell her he’ll take her for a winter driving lesson. “No one in Genoa City is as handsome or as charming as you and I really like hanging out with you,” she’ll say. Jack will tell Sally he likes her too and looks forward to their next outing.

Meanwhile, Rey will tell Sharon he knows the kiss she shared with Adam was an impulsive mistake on his part. “But even when Adam’s not around he’s still a presence in our marriage.” However, Rey is committed to their marriage and wants them to come out of this stronger than they were before. “I’m so glad to hear you say that,” Sharon will reply. “I’m willing to do whatever it takes.”

But when Rey suggests couples therapy, the look on her face will make her statement seem like an empty promise. He’ll tell her whenever Adam’s around she loses all sense and reason and she will balk at the idea. He’s studied the photo of her kissing Adam and knows she didn’t fight it. “Your hands are on his shoulders.” Sharon will deny that she kissed Adam back. Will Rey be able to get through to Sharon in order to save their marriage?