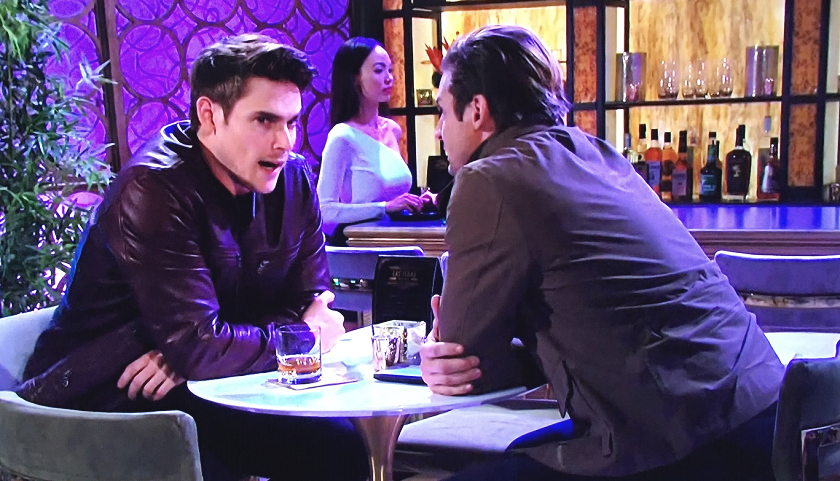 Young And The Restless (Y&R) spoilers for Friday, February 14 suggest Adam Newman (Mark Grossman) and Chance Chancellor (Donny Boaz) will arrive in Las Vegas. And although she won’t be there, Phyllis Summers (Michelle Stafford) will finally discover their secret.

Also coming up on Friday, Sharon Newman (Sharon Case) will deal with her daily life as a cancer patient and Jack Abbott (Peter Bergman) will give Kyle Abbott (Michael Mealor) and Summer Newman (Hunter King) some advice.

Adam will sit in a bar in Vegas, waiting to speak to Riza Thomas (Tina Casciani). As Chance meanders up behind him he’ll roll his eyes. “For the love of God, Chance.” While the two men argue, a waitress will place a bug underneath a chair.

Meanwhile, Phyllis Summers (Michelle Stafford) is still in Genoa City. She’ll get a text saying the listening device has been planted. At the Grand Phoenix, she’ll listen in on the conversation between Riza, Adam and Chance. Phyllis will find out the men are paying a woman to stay quiet. Riza will say the woman doesn’t care about her missing husband, she’s only interested in the money she thinks he hid before he disappeared.

Adam will tell Chance he was his only friend, besides Riza, while he was Spider and Chance will thank him for saving his life. “When I realized you were in danger, I did what I had to do,” Adam will say. “I just wanted to scare the guy off, I never imaged he’d come at me like that.” Chance will tell him it was an accident but Adam will counter, saying no one will see it like that. Listening in, Phyllis will let out a sigh of relief and say “Boom!”

At Jabot, Summer and Kyle will embrace, but she’ll tell him they should probably cut it out, since they’re at work, but then they start kissing again. Jack will walk in and tell Skyle they should take things slow. When they defend the fact that they’ve found each other again, Jack will tell them he hopes they’ll learn from their mistakes.

At Crimson Lights, Rey Rosales (Jordi Vilasuso) will ask how Sharon is feeling, pull her close and tell her he loves her. Nick Newman (Joshua Morrow) will also show up and he and Rey will discuss Kola’s breakup. Rey will tell Nick he doesn’t blame Summer for any of it, it’s on Kyle. “That guy has gone too far on his name and his looks,” Rey will say. “He thinks he can just skate through life with no consequences.”

Later, Rey will come home to an extremely anxious Sharon and he’ll tell her to take a deep breath. She’ll tell him she suddenly felt nauseous but she’s feeling better now. She’ll say the treatments are tough on her, but she knows she can do it.

Meanwhile, in Las Vegas, Adam hopes he’s made their problem disappear because he never wants to deal with it ever again. It looks like another great episode is coming up. Keep reading The Soap Scoop for more Young And The Restless spoilers and news. And make sure you join our free Facebook Group.