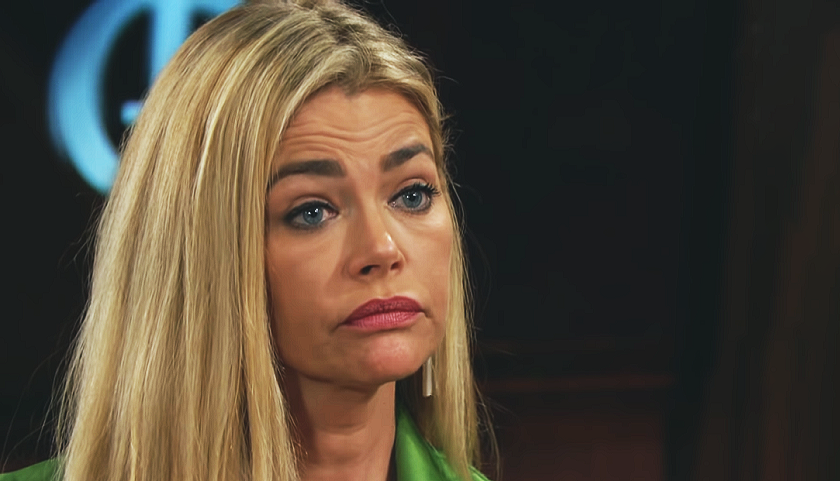 The Bold And The Beautiful (B&B) scoop for Friday, June 11 reveals Shauna Fulton (Denise Richards) will give Quarter some bad news.

Spoilers tease Zoe will feel as though her life is finally back on track. Carter has forgiven her for everything and she’s his fiancé again. “We were naïve I think when I first put this on your finger,” Carter said after he pulled out the ring. “And a lot has happened since then. A lot of hurt, but also a lot of growth. I think we’re a better match now than we were before.”

Bold And The Beautiful Scoop – Will Paris Buckingham Blab The Big Secret?

Of course, Zoe is also completely unaware that her relationship status could be blown apart at any second. Paris Buckingham (Diamond White) just found out Shauna wasn’t the other woman in Carter’s wife, it was Quinn Forrester (Rena Sofer).

But when Zoe tells Paris she and Carter are reengaged, will her sister tell her what she learned? She’ll know Zoe’s whole world would crumble. So, will she decide it’d be best for everyone involved to keep quiet about it, for now?

Meanwhile, Carter and Quinn will update each other on Zoe and Eric Forrester (John McCook). Quinn will be pleased to hear that Carter proposed to Zoe. And Carter will tell Quinn he’s happy for her that things are going well with Eric.

These two are obviously still attracted to each other, so their meeting will be a highly charged one. The spark between Quinn and Carter is undeniable, however, they will likely manage to keep their hands off each other on Friday. After all, they’ve both got a lot at stake.

But they’ll suddenly realize their relationships are on shaky ground, when Shauna bursts in with some stunning news. She’ll tell Quinn that Paris overheard their conversation and knows she was the woman in Carter’s life and his bed. Quarter will realize their secret could explode at any moment and there’s nothing they can do about it. Will their tantalizing transgression be revealed next week?

Today on #BoldandBeautiful, Carter prepares a romantic night for Zoe and has a surprise in store! pic.twitter.com/GFtzXcp2Fz