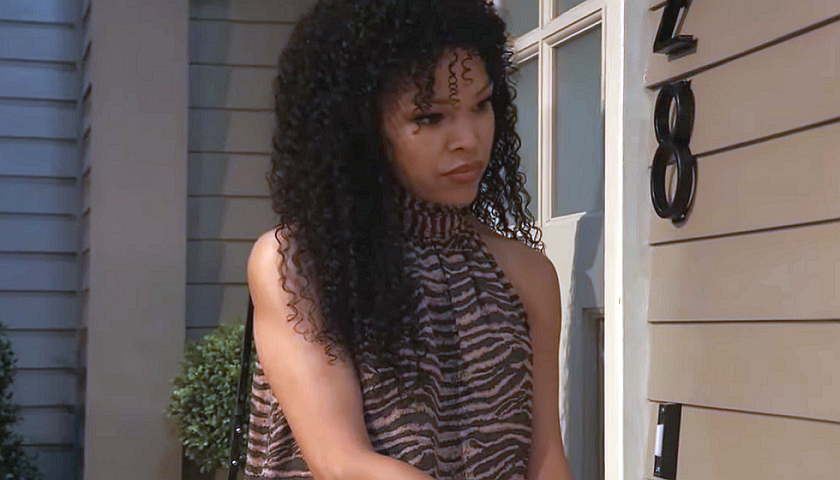 The General Hospital (GH) scoop for the week of May 31 hints Portia Robinson (Brook Kerr) will face a difficult and dangerous predicament.

Also coming up this week, Maxie Jones (Kirsten Storms) will stick to her plan. Plus, will Gladys Corbin (Bonnie Burroughs) make it and will Peter August (Wes Ramsay) survive his tumble down the stairs?

Viewers should note, GH will air a repeat episode on Memorial Day – Monday, May 31. The episode previously aired on November 4, 2020. It involves the Floating Rib explosion that took the lives of Dev Cerci (Ashton Arbab) and Dustin Phillips (Mark Lawson).

Spoilers tease Elizabeth Baldwin (Rebecca Herbst) will discover Peter lying at the bottom of the stairs. She’ll check his pulse and attend to his head wound. And unfortunately for Maxie, he’ll survive. But did Liz see who pushed him?

Over with Gladys, who will also survive her gunshot injuries. Rumor has it, after her successful surgery, she’ll finally tell the truth about Franco Baldwin’s (Roger Howarth) murder. However, will this clear Jason Morgan (Steve Burton) of the crime once and for all?

Meanwhile, Maxie’s new baby will survive but she knows she can’t keep her. She’ll never want to let Louise go. However, Maxie will still move forward with her plan to hand the baby over to Brook Lynn Quartermaine (Amanda Setton). Protecting Louise from Peter is her main priority now, but giving up her daughter will also break her heart.

Finally, as viewers saw on Friday, Portia was in a terrible spot when she arrived home to find blood on her floor. As she stood up and turned around, she saw an injured Cyrus Renault (Jeff Kober) standing against a wall with a gun. GH spoilers show Cyrus will force her, at gunpoint, into removing the bullet lodged in his body.

Portia will be terrified that Trina Robinson (Sydney Mikayla) could walk in at any time. And of course she will. However, Jordan Ashford (Briana Nicole Henry) and Curtis Ashford (Donnell Turner) will also end up showing up. “Play this smart and we’re all going to walk away alive,” Cyrus says in the GH sneak peak.

But can they all work together to overpower an injured, yet still deadly, Cyrus? At  any rate, it looks like another great week coming up! Keep reading The Soap Scoop for more General Hospital spoilers and news. And make sure you join our free GH Facebook Group.