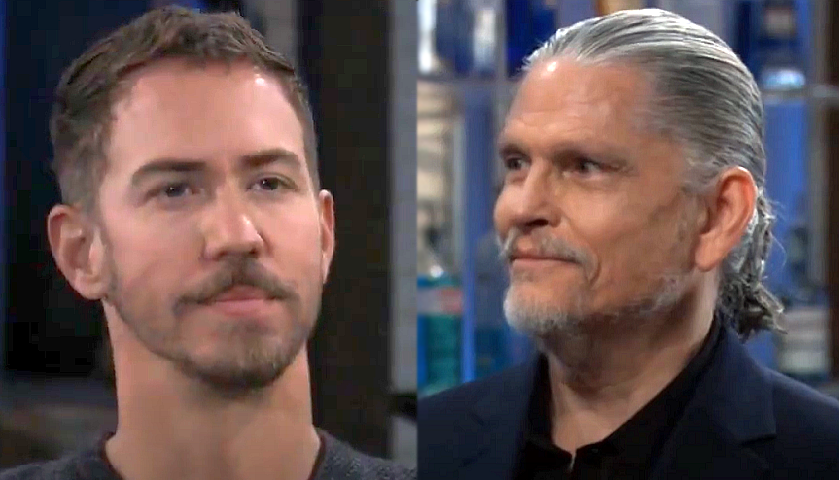 The General Hospital (GH) scoop for the week of May 10 hints Peter August (Wes Ramsay) and Cyrus Renault (Jeff Kober) will meet unexpectedly.

Also coming up this week, Britt Westbourne (Kelly Thiebaud) and Jason Morgan (Steve Burton) will get closer, as will Curtis Ashford (Donnell Turner) and Portia Robinson (Brook Kerr). Plus, Maxie Jones (Kirsten Storms) will get a surprise.

Spoilers tease Maxie will meet with her nurse, since Britt’s hiding out with Jason. But what will the nurse tell her about her pregnancy? Could her baby be facing a health issue, or is she expecting twins? Whatever the case, it could hinder her plans with Brook Lynn Quartermaine (Amanda Setton).

Speaking of Britt, she and Jason will bond while they’re on the run. Rumor has it she’ll also open up to him about something and it will bring them even closer together. But is an epic romance ahead for the doctor and the mobster?

Over with Curtis, who will spend some quality time with Portia. Viewers know these two are friends. But they’ve also started developing feelings for each other, even though Curtis ‘ divorce from Jordan Ashford (Briana Henry) hasn’t been finalized.

Finally, Peter will run into Cyrus at the Metro Court this week. And the villains may have quite a bit to discuss. However, the Port Charles mobster will have a word of warning for the publisher. “Dropping your guard is a monumental mistake,” he tells him in the GH sneak peak.

But of course, Peter is an overconfident narcissist who believes he’s got everything under control. So, will he heed Cyrus’ advice?