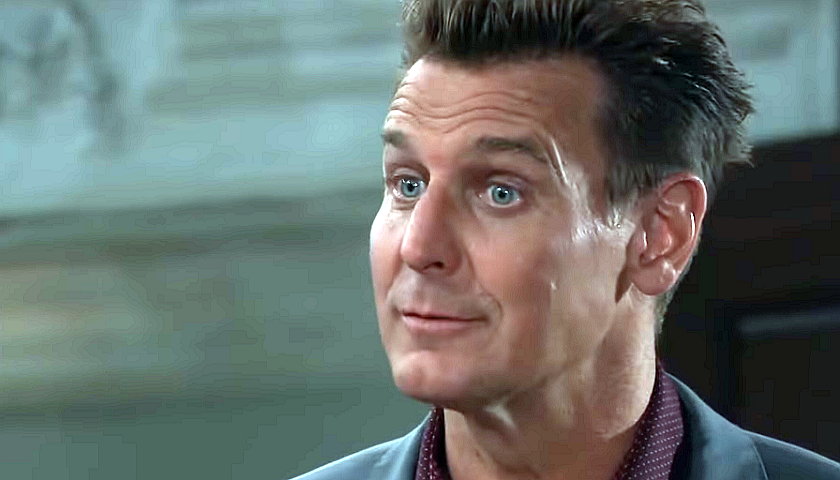 The General Hospital (GH) scoop for the week of June 7 hints Jasper Jacks (Ingo Rademacher) will have his share of run-ins.

GH spoilers tease Brook Lynn will be amazed by how smitten Valentin is with Bailey. But in the GH weekly preview, she’ll be freaking. “Where’s Bailey?!” she yells. More than likely, she’ll find the child somewhere in the house, resting safely in Valentin’s arms. But at some point Maxie Jones (Kirsten Storm) is going to want her baby back. This is guaranteed to turn into a heartbreaking mess for everyone involved.

Meanwhile, Ava Jerome (Maura West) and Nikolas Cassadine (Marcus Coloma) will invite Dante to Windermere. They want to know who is stalking them and they’ll ask if he can help them find out. But will Dante agree to look into it for them?

General Hospital Weekly Scoop May 24 to 28: Mike Has A Warning For Nina – Valentin Issues A Threat – Maxie Is Ready #GH #Generalhospital https://t.co/K2EWwbCpKB

Over with Stella, who will show up at General Hospital. She’ll want to know why Curtis Ashford (Donnell Turner) is lying in a hospital bed fighting for his life. “What happened to my nephew?” Stella will ask Laura Collins (Genie Francis) and Jordan Ashford (Briana Henry). And Trina Robinson (Sydney Mikayla) will sit by Curtis’ hospital bed. “You need to live Curtis!” she’ll exclaim.

Other spoilers tease Elizabeth Baldwin (Rebecca Herbst) and Hamilton Finn (Michael Easton) will race against the clock to find a cure for his brother. Now that Peter August (Wes Ramsay) is dead (but is he really?) they’ll have to save Harrison Chase (Josh Swickard) on their own.

Finally, GH spoilers show Jax will blackmail Michael Corinthos (Chad Duell). He knows Michael slept with Willow Tait (Katelyn MacMullen) and he’ll pressure him to allow Nina visitation with her grandson. But will Michael agree to it?

Carly Corinthos (Laura Wright) will ask Jax why he’s still pushing the issue. As far as she’s concerned, Nina is long gone, and good riddance. Of course, if Nina finds out she can see Wiley, she’ll need to make a decision. She could stick it out in Nixon Falls with “Mike” and possibly pursue a romance with him. But if Jax calls her with good news about Wiley, will she return to Port Charles for good?