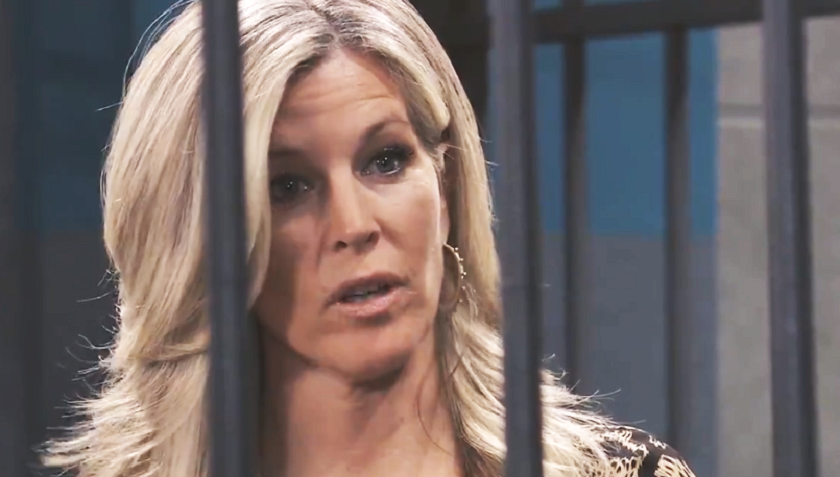 General Hospital (GH) spoilers for the week of February 24 hint Julian Jerome (William deVry) will work hard to make sure he isn’t associated with the baby switch.

Spoilers tease Julian will pressure Brad Cooper (Parry Shen) to keep his name out of the whole baby Wiley debacle. He knows that if the truth about his part in it comes out, his life would fall apart.

Also coming up this week, Carly Corinthos (Laura Wright) will pay Nelle a visit in prison and Trina Robinson (Sydney Mikayla)) and Cameron Webber (William Lipton) will make a pact.

Josslyn Jacks (Eden McCoy) will suffer some pangs of jealousy this week. She’ll find out about Trina and Cam’s date for the winter formal. Even though they told Joss they were going together as friends, Trina will tell her they’ve developed feelings for each other. Cam won’t be happy about this, however, he has no idea it’s all part of Trina’s plan to get Joss and Cam together.

Then there’s Joss’ mom Carly, who will personally deliver a stern warning to her former daughter-in-law. She’s never been a fan of Nelle’s, and her latest scheme was just the icing on the cake. “You are never going to see Wiley again,” Carly tells Nelle in the GH weekly video preview. “If the legal system doesn’t make certain of it, I will.”

Over with Julian, who doesn’t want anyone to find out he’s known about the baby swap for months. He’ll pay a visit to Brad, who is also in prison, and offer to pay for his legal fees. Brad will gladly accept the offer. But he’ll let his father-in-law know, in no uncertain terms, that if he is convicted, he’ll take down everyone involved, including Julian.

In other spoilers, Monica Quartermaine (Leslie Charleson) will be thrilled when she finds out Michael Corinthos’ (Chad Duell) child has survived. And Michael will spend some quality time with his boy. Even though she’s happy for Michael, a heartbroken Willow Tait (Katelyn McMullen) will deal with the loss of her own child.

Finally, Nikolas Cassadine (Marcus Coloma) is going to confide in Elizabeth Baldwin (Rebecca Herbst). The innocent kiss between Ava Jerome (Maura West) and Franco Baldwin (Roger Howarth) captured in a photo will cause problems for both of them. Nik may tell Liz that he suspects there’s more than meets the eye when it comes to Ava and Franco.